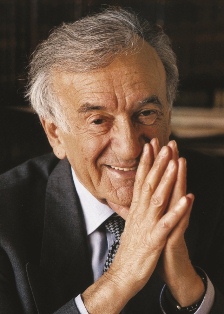 “Professor Elie Wiesel is a true humanitarian and peace advocate who has impacted our world for most of his life through his works, writings and commitment to the plights of the oppressed,” says Kent State President Lester A. Lefton. “Having a man of his caliber, who has achieved much for humanity, at Kent State is indeed an honor, and so I invite all members of our community to come and learn from what promises to be a thought-provoking session.”

In 1928, Wiesel was born in Sighet, Romania, (Hungary 1940-45). He was 15 when he and his family were deported to Auschwitz. His mother and younger sister perished there. He and his father were later transported to Buchenwald, where his father died shortly before the camp was liberated in 1945.

After the war, Wiesel studied in Paris and eventually became a journalist in that city, yet he remained silent about his time in the death camps. During an interview with the French writer François Mauriac, he was persuaded to end that silence and wrote his memoir “Night.” Since its publication in 1956 in Yiddish and in 1958 in French, “Night” has been translated into more than 30 languages and millions of copies have been sold. In 2006, Farrar, Straus and Giroux published a new English-language edition of “Night” featuring a new translation by Marion Wiesel. Oprah Winfrey chose the book for her book club.

Wiesel’s personal experience of the Holocaust led him to use his talents as an author, teacher and storyteller to advocate for human rights and peace in the world. He has worked on behalf of oppressed people much of his adult life.

An ardent supporter of Israel, Wiesel also was among the first to defend the causes of Soviet Jews, Nicaragua’s Miskito Indians, Argentina’s “Disappeared,” Cambodia’s refugees, the Kurds, South African apartheid victims, famine victims in Africa, the prisoners in the former Yugoslavia, and most recently the victims of genocide in Darfur. Soon after he received the Nobel Peace Prize in 1986, Wiesel and his wife, Marion, established The Elie Wiesel Foundation for Humanity. Its mission, rooted in the memory of the Holocaust, is to combat indifference, intolerance and injustice through international dialogue and youth-focused programs that promote acceptance, understanding and equality.

Wiesel’s work has earned him the United States Congressional Gold Medal (1985); the Medal of Liberty Award (1986); the Presidential Medal of Freedom (1992); the rank of Grand-Croix in the French Legion of Honor (2001); an honorary Knighthood of the British Empire awarded by Her Majesty, Queen Elizabeth II (2006) and the 2009 National Humanities Medal. He is the recipient of more than 130 honorary degrees from institutions of higher learning in the United States, Europe and Israel. In 1978, President Jimmy Carter appointed him chairman of the President’s Commission on the Holocaust. In 1980, he became founding chairman of the United States Holocaust Memorial Council, which created the United States Holocaust Memorial Museum in Washington, D.C.

Wiesel has served as distinguished professor of Judaic Studies at the City University of New York (1972-1976) and the Henry Luce Visiting Scholar in the Humanities and Social Thought at Yale University (1982-1983). Since 1976, he has been the Andrew W. Mellon Professor in the Humanities at Boston University, where he also holds the title of University Professor and is a faculty member in the departments of religion and philosophy. In 2002, Boston University created The Elie Wiesel Center of Jewish Studies in his honor.

Wiesel has been an American citizen since 1963.

The Kent State Presidential Speaker Series seeks to bring high-profile, world-renowned experts to Kent State for serious, thought-provoking discussions and conversations. The new program enhances the engagement of the world beyond Kent State’s campuses, which is one of the university’s strategic goals.