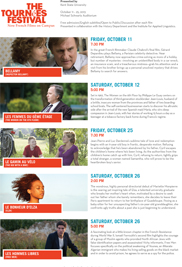 The 2013 Tournées Festival features five French films with English subtitles, one of which includes a live presentation from director and guest speaker Mairette Monpierre. The films will be featured in the Schwartz Center Auditorium from Oct. 11-26. The event, presented by Kent State University’s Department of History and Institute for Applied Linguistics, is free and open to the public. Following each film, the audience is welcome to participate in a discussion.

Mariette Monpierre, the director of Le bonheur d’Elza, is attending the Oct. 26 screening. Following the film, Monpierre will speak about the award-winning film and lead a Q&A session.

The film schedule is as follows:

Bellamy (Inspector Bellamy), Friday, Oct. 11, at 7:30 p.m.
In the great French filmmaker Claude Chabrol’s final film, Gérard Depardieu plays Bellamy, a Parisian celebrity detective. Near retirement, Bellamy now approaches crime-solving as more of a hobby, but number of mysteries —involving an unidentified body in a car wreck, an insurance scam and a treacherous mistress — grab his attention and a visit from his brother brings up a personal unsolved mystery that drives Bellamy to search for answers.

Les femmes du 6ème étage (The Women on the 6th Floor), Saturday, Oct. 12, at 7: 30 p.m.
Set in 1962, The Women on the 6th Floor by Philippe Le Guay centers on the transformation of third-generation stockbroker Jean-Louis, husband of a brittle, insecure woman from the provinces and father of two boarding-school brats. The self-centered businessman starts to discover his altruistic side after the arrival of the new Spanish maid, María, who stirs deep compassion in Jean-Louis, with her stories of working 15 hours a day as a teenager at a tobacco factory back home during Franco’s regime.

Le gamin au vélo (The Kid with a Bike), Friday, Oct. 25, at 7:30 p.m.
Jean-Pierre and Luc Dardenne’s sublime tale of love and redemption begins with an 11-year-old boy in frantic, desperate motion. Refusing to acknowledge that he’s been abandoned by his father, Cyril escapes the children’s home where he’s been living. As the authorities from the children’s home catch up with him, Cyril, refusing to return, tightly grips a total stranger, a woman named Samantha, who will prove to be the heartbroken boy’s savior.

Le bonheur d'Elza (Elza), Saturday, Oct. 26, at 2 p.m.
The wondrous, highly personal directorial debut of Mariette Monpierre is the searing yet inspiring tale of Elza, a talented university graduate who breaks her mother’s heart when, motivated by a desire to seek out her father whom she barely remembers, she decides to leave their Paris apartment to return to her birthplace of Guadeloupe. Posing as a babysitter for her unsuspecting father’s six-year-old granddaughter, she confronts ugly truths about a past she is just beginning to understand.

Les hommes libres (Free Men), Saturday, Oct. 26, at 5 p.m.
A fascinating look at a little-known chapter in the French Resistance during World War II, Ismaël Ferroukhi’s second film highlights the courage of a group of Muslim agents who provided North African Jews with false identification papers and assassinated Vichy informants. Free Men focuses specifically on the political awakening of Younes, an illiterate Algerian immigrant who makes his living selling goods on the black market and in order to avoid prison, he agrees to serve as a spy for the police.