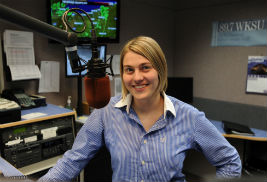 Rabinowitz was honored for Best Sports Reporting for an in-depth report on the misuse of prescription painkillers by college athletes. Her story followed the overdose deaths of two former University of Akron football players who died within six months of each other in 2011. Their parents claimed they became hooked on painkillers when they got injured and feared losing their scholarships. The parents also claimed the school did little to help.

Rabinowitz spent several months researching the issue, exploring all sides of the story. She spoke with nationally recognized sports orthopedic surgeons about common painkiller prescriptions, as well as representatives of the NCAA and the Mid-American Conference regarding their drug testing policies and procedures and the University of Akron. To learn more about this very personal issue, Rabinowitz drove to Columbus, Ohio, to conduct a two-hour interview with the family of one of the profiled boys — learning everything from memories of his childhood to the horrible moment when his mother found him in his bedroom dead from a heroin overdose.

Rabinowitz has been a reporter and producer at WKSU since 2007, and she is currently WKSU’s weekday host for NPR’s Morning Edition. Along with three Regional Murrow wins, she has been recognized multiple times by the Press Club of Cleveland, Ohio Associated Press Broadcasters, Ohio Society of Professional Journalists, Ohio Professional Writers and the National Federation of Press Women. Rabinowitz came to WKSU from WJER-AM/FM in Dover, Ohio, where she won an Ohio Associated Press Broadcasters' award for Best Reporter in the state. In May 2008, she completed the master's degree program in communications at the University of Akron.

WKSU is a service of Kent State University and broadcasts to 22 counties in Northeast Ohio from the station’s primary signal at 89.7, along with WKRW 89.3 (Wooster), WKRJ 91.5 (Dover/New Philadelphia), WKSV 89.1 (Thompson), WNRK 90.7 (Norwalk) and W239AZ 95.7 (Ashland). The station adds WKSU-2 Folk Alley, WKSU-3 The Classical Channel and WKSU-4 The News Channel over HD Radio and as streaming audio online at www.wksu.org.