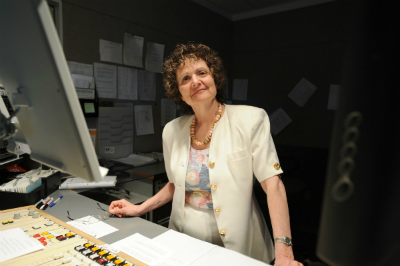 WKSU host and reporter Vivian Goodman has been inducted into the Cleveland Journalism Hall of Fame during an event presented by the Press Club of Cleveland at the Hilton Garden Inn. Other inductees for 2012 included Jim Collins, Ted Diadiun, Vern Henry and Stuart Warner. Plaques for all inductees hang at Nighttown restaurant in Cleveland Heights, Ohio. The event helped celebrate the 125th anniversary of the Press Club of Cleveland and the 31st class of the Journalism Hall of Fame.

Photo of Vivian GoodmanGoodman began her radio journalism career as a University of Chicago student by helping to cover a demonstration outside the trial of the Chicago Eight in 1969. She returned to Northeast Ohio after graduation, working at WHLO-AM in Akron, Ohio, as continuity director. With a sense of wanderlust, Goodman bummed around Europe for a few years – eventually owning a café in Brussels – before coming home. She worked in Cleveland at soul station WABQ-AM, where she met Congressman Louis Stokes. Goodman followed Stokes to Capitol Hill, becoming the congressman’s press secretary. She stayed in the Washington, D.C., area while transitioning back to radio.

When Goodman started her family, she chose to do so in Cleveland and was welcomed by Leonard Will at WERE-AM. Two years later, she joined Will at the start-up WCPN-FM, where she created the morning talk show “After Nine.” In 1996, Goodman assumed her present position at WKSU – working again with Will, who was then the station’s host of NPR’s “Morning Edition.” Currently, Goodman is WKSU’s local host of NPR’s “Fresh Air with Terry Gross” and “All Things Considered,” as well as a full-time member of the station’s award-winning news staff. In 2012, Goodman won numerous first-place awards – including from Associated Press Broadcasters, the Press Club of Cleveland and National Federation of Press Women – for her series on the current status of the LGBT community in Northeast Ohio in advance of the 2014 Gay Games.

Goodman’s latest project is “Quick Bites,” a weekly segment on food, cooking and eating heard Fridays during “Here and Now” and “All Things Considered.” Listeners can find out more about the week’s “Quick Bites” (including pictures of each segment’s subjects) on the program’s Facebook page.

WKSU broadcasts NPR and classical music at 89.7 FM, and is a service of Kent State University. WKSU programming is also heard on WKRW 89.3 FM in Wooster, WKRJ 91.5 FM in Dover/New Philadelphia, WKSV 89.1 FM in Thompson, WNRK 90.7 in Norwalk and W239AZ 95.7 FM in Ashland. The station broadcasts four HD Radio channels – adding WKSU-2 Folk Alley, WKSU-3 The Classical Channel and WKSU-4 The News Channel to the analog broadcast schedule. The WKSU website is www.wksu.org.