Academy Award-winning actress, author and deaf advocate Marlee Matlin will be the keynote speaker at an event marking October as disAbility Awareness Month at Kent State University. Matlin’s address on Tuesday, Oct. 9, at 7 p.m. at the Kent Student Center Ballroom is free and open to the public. 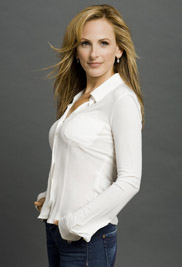 Matlin received critical acclaim for her film debut in "Children of a Lesser God," which earned her the Academy Award for Best Actress and the Golden Globe Award for Best Actress in a Drama. In addition to her film roles, Matlin has starred in numerous TV shows, including “The West Wing,” “Reasonable Doubts,” “Switched at Birth” and “Dancing with the Stars.”

“We think Ms. Matlin embodies the spirit of what this celebration month is all about,” said Amy Quillin, senior associate director of Student Accessibility Services at Kent State.

“Ms. Matlin will focus her address around some of the common misconceptions and attitudinal barriers that she has had to face, and how she overcame them,” Quillin said. Matlin will also share with the audience how she would like the university and community to recognize and honor people’s ability, rather than focusing on their disabilities.

“I think Ms. Matlin's presence at Kent State honors the deaf community, in particular, in recognizing and giving a voice to the myriad challenges that this population has endured and overcome,” Quillin said.

Matlin currently serves as a national celebrity spokesperson for The American Red Cross and was instrumental in getting legislation passed in Congress in support of closed captioning. She also serves on the boards of a number of charitable organizations including The Children Affected by AIDS Foundation and Easter Seals. She has authored three novels for children: "Deaf Child Crossing," “Nobody's Perfect” and “Leading Ladies.” In 2009, she released her best-selling autobiography, “I'll Scream Later.”

“We have not had a deaf actress or speaker of Ms. Matlin’s caliber serve as a keynote for this event,” Quillin said. “We are very excited and exceptionally privileged to be able to bring her to campus and have her speak to the university community.”