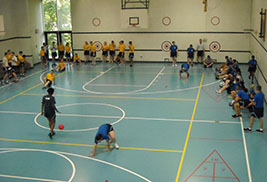 Cadets at the Air Force ROTC Detachment 630 at Kent State University participated in a Warrior Day event on Oct. 1. The event took place during the cadets’ Leadership Laboratory at the Memorial Athletic and Convocation Center Annex gymnasiums.

Warrior Day inspires a sense of motivation, helps build esprit de corps and increases warrior ethos. After a very motivational National Anthem video, cadets began the workout challenge with stretches and were then split into two groups of two flights, one in each of the gymnasiums. Both groups started the day with a relay race consisting of down-and-backs, ranger push-ups, bear crawls and line sit-ups.

“I thought they [the workout challenges] were fun and they brought out the competitiveness,” says Cadet Jordan Love. “I feel like this Leadership Laboratory brought my flight closer together.”

Afterward, cadets participated in an outdoor warrior run. The Air Force ROTC cadre introduced a surprise activity, splitting the cadets into four groups to test them on several levels of leadership, including decision-making. The cadet groups participated in extended running, architecture, physical training and a minefield group leadership project.

“I thought it was fun,” states Cadet David Kahwaji, a freshman Air Force ROTC cadet. “The only difficult part was that there was only one person in our group from Kent, but he knew where he was going. The execution of events went well, and everyone seemed to have a good time.”

The day ended with Detachment 630 painting the rock on Front Campus. Lt. Col. Daniel Finkelstein, professor of aerospace studies, gave a motivational closing speech, and the cadets had a retreat at the flagpole in front of Terrace Hall Annex.