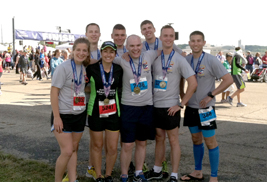 Eight representatives from Air Force ROTC Detachment 630 at Kent State University traveled to Dayton on Saturday, Sept. 21, for the annual Air Force Marathon, an international race that began in 1997 to celebrate the 50th anniversary of the Air Force. The team from Kent State included both cadre and cadets.

“It’s one of the greatest moments to test your warrior ethos because you have to physically and mentally challenge yourself to get to the breakpoint. You have to run through that wall,” says Cadet Gage Philp, a junior in the Air Force ROTC program at Kent State. “You physically get tired, and then you have to be mentally strong enough to push through.”

Philp mentions the motivation for running nonstop were the shirts that they wore that bore the names of some local heroes who had served in the military and paid the ultimate sacrifice.

“When I would tire, I would find the motivation to go on. I didn’t want to let those people down because their names were on our backs,” Philp says.

Running the Air Force Marathon is a personal challenge for many people. To many of the cadets and other runners, running and finishing the race meant something much more than the medal they received at the finish line.