The Alcoa Foundation, in partnership with national nonprofit Keep America Beautiful (KAB) and the College and University Recycling Coalition (CURC), provided 60 recycling bins to Kent State as part of its national bin grant program to colleges and univers 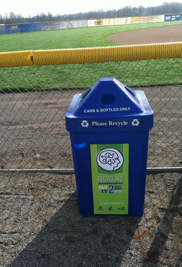 The Alcoa Foundation, in partnership with national nonprofit Keep America Beautiful (KAB) and the College and University Recycling Coalition (CURC), provided 60 recycling bins to Kent State as part of its national bin grant program to colleges and universities throughout the country during the 2012 RecycleMania collegiate recycling competition.

The bin grant program is an effort to help schools boost their results during the competition, and expand their recycling collections throughout the year. Alcoa Foundation has awarded 32 grants to colleges and universities, ranging from well-known large universities to smaller schools. In total, 20,000 recycling bins will be distributed on campuses throughout the country.

Kent State will use its bins for outdoor events where little or no additional recycling is currently provided, such as football games, other sporting events, festivals, summer sports, cheerleading and band camps.

"These bins will give us the flexibility to provide more recycling for outdoor events.  Sporting events, festivals and camps produce a lot of recyclable bottles and cans and in the past, our ability to collect them has been limited,” says Manager of Sustainability Melanie Knowles. “Now there will be a sturdy recycling bin for every extra trash bin that is placed by the grounds department for these events."

RecycleMania is a friendly competition and benchmarking tool for college and university recycling programs to promote waste reduction activities in their campus communities. During the competition, colleges and universities vie for top awards in nine categories to see which schools recycle the most on a per capita basis, produce the least amount of waste and recycle the largest percentage of their overall waste.

“Our continued support of RecycleMania is designed to ignite real change, to achieve one thing: dramatically higher recycling rates,” says Beth Schmitt, director of recycling programs for Alcoa. “Through the recycling bin grant program, we want to encourage a social shift toward recycling on college campuses. We want to show millennials that recycling is not only the right thing to do, it's the smart thing to do, and it’s something they should be in the habit of doing long after they leave college.”

“RecycleMania provides colleges and universities with an easy way to boost recycling on campus and to instill students with a greater sense of obligation to recycle throughout their lives,” says Matthew M. McKenna, president and CEO of Keep America Beautiful. “We’re thankful for the support of Alcoa Foundation, and for the company’s continued leadership in advancing recycling nationwide.”

Since 2008, Alcoa has distributed more than 100,000 recycling bins, launched the “Make an Impact” program to help families live more sustainably, developed the free Aluminate™ recycling app, and, in the last five years, invested nearly $3.5 million in community-based recycling programs. Alcoa Foundation helped kick off the 2011 RecycleMania competition by awarding 13 universities across the U.S. with thousands of stackable, six-gallon bins appropriate for use in student housing and offices. Alcoa’s recycling initiatives can be found at http://alcoa.com/alcoa_recycling.