Alfreda Brown, Trailblazing Leader of Diversity, Equity and Inclusion, to Retire After More Than a Decade of Leadership

For nearly 11 years, Alfreda Brown, Kent State University’s vice president for diversity, equity and inclusion, has been a powerful voice for making sure no one in the university’s wide-reaching system is marginalized, discriminated against or left behind.

With a heart for caring, Brown has worked to ensure that everyone feels welcome, appreciated and understood at Kent State. 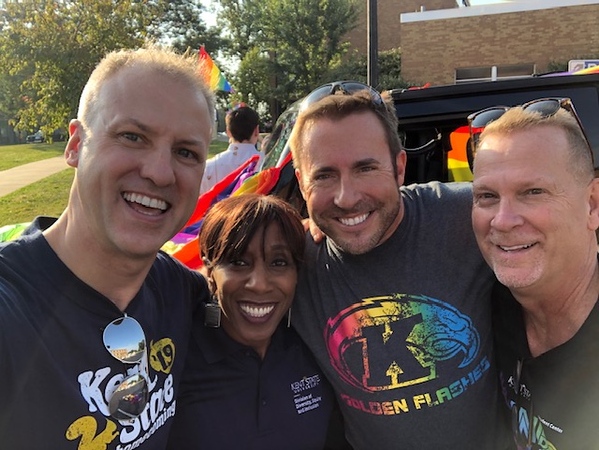 Now, as her retirement looms at the end of May, Brown is even able to empathize with graduating seniors, athletes and others who have seen their senior years and winning seasons dashed by the COVID-19 pandemic.

She, too, has had to adjust to leaving Kent State without being able to bid farewell to the university community she has served. The university had planned to honor her at an April retirement party, which was canceled due to the pandemic.

And as with the university’s commencement, Brown’s staff put together a virtual retirement celebration, filling a university webpage with photos, tributes and videos to mark her departure from Kent State.

When Brown arrived on campus in October 2009, she became the first person ever to lead a university division dedicated completely to promoting diversity, equity and inclusion.

The Division of Diversity, Equity and Inclusion was created by former President Lester A. Lefton as part of his excellence agenda and its mission to create a more cohesive, welcoming environment for all students, faculty and staff across all eight Kent State campuses.

“In a relatively short time, Dr. Brown was able to take the Division of Diversity, Equity and Inclusion and transform it from a nascent division to one of Kent State’s most important assets,” President Todd Diacon said.

“She has demonstrated the exceptional ability to mold her staff into a team of a professionals truly dedicated to the principals of diversity, equity and inclusion, which has forever transformed the culture of acceptance, respect and kindness for all who work and learn at Kent State,” Diacon said. “Alfreda will be missed, but her retirement is well-earned, and her legacy will live on in the many initiatives that she established.”

To Brown, diversity means more than seeing that the needs of certain groups are met; it is making sure that all populations feel included.

“I really feel that diversity is about everybody,” she said.

Fulfilling her vision meant building a team whose members were working toward the same goal, which she accomplished with much training and some realigning of staff. She wasn’t afraid to tell a staffer to “get on board” with her plans and some who didn’t either left or were asked to leave. 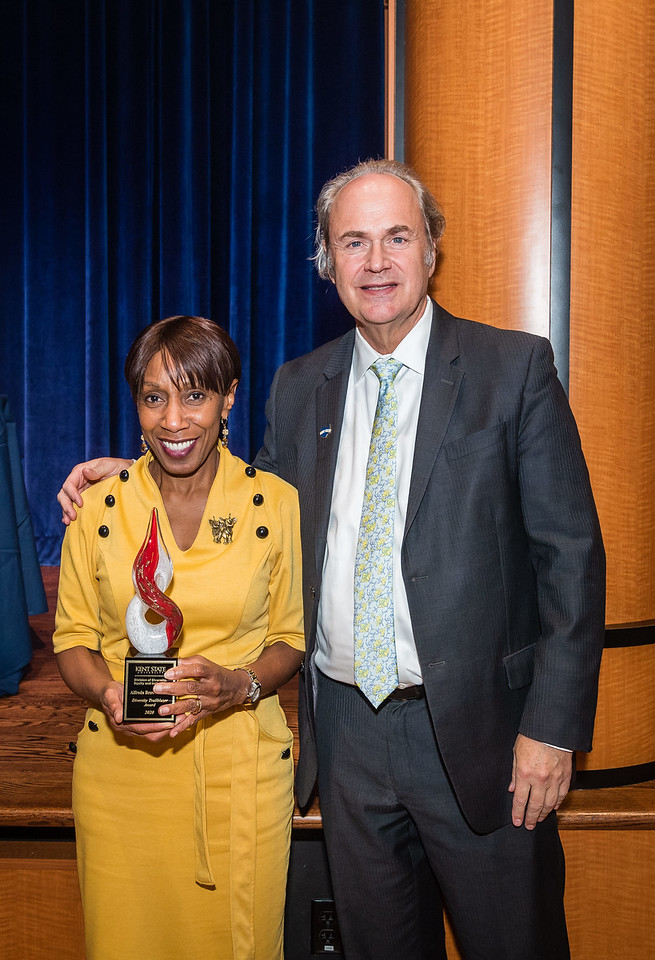 Brown believes that one must have a passion to work in equity and inclusion to create an environment where those ideas can take root and blossom.

“You have to care about people, care about what is happening and care about how you can make it better,” she said.

Over her tenure, Brown’s division established four centers to serve the needs of students, faculty and staff – the Women’s Center, the Student Multicultural Center, the LGBTQ+ Center and the Center for Sexual and Relationship Violence Support Services, as well multiple programs and initiatives aimed at making sure no one on campus is marginalized or left out.

“Our four centers are booming, I mean, absolutely booming,” Brown said. “It’s not just about black and brown people. It is about everybody, and the wider you spread that net, whoever comes, we are going to take care of their needs.”

Those who have worked with Brown are as passionate about her leadership as they are about the cause of diversity, equity and inclusion.

“The pure tenacity and dedication that Dr. Brown provided our division will be the catalyst that propels our continued diversity work. I am forever grateful to her example of commitment and leadership,” Williams said. “Dr. Brown will be sorely missed – there are not enough words to express my appreciation for her allowing me to reach new heights professionally. Because of her encouragement and tutelage, I have fire in my belly to ensure Kent State will continue to enhance a sense of belonging for all.”

Dana Lawless-Andric, associate vice president for Diversity and Inclusion Leadership within the division, said Brown’s legacy is the impact she made on Kent State and on the lives of so many she touched during her time at Kent.

“She led with heart, passion and a deep commitment to ensuring the voices of all were heard, valued and mattered. It has been my utmost honor to work under her tenure and I am forever grateful to her and we are all better for her time with us at Kent State,” Lawless-Andric said.

Earlier this year, the university named its Diversity Trailblazer Award after Brown to honor her years of groundbreaking service. The award, presented annually at the university’s Martin Luther King Jr. Day celebration, is given to individuals who make exemplary contributions to the university community in diversity.

Brown came to Kent State after working 21 years at the Rochester Institute of Technology, in Rochester, New York, her hometown, and 10 years prior to that working at Eastman Kodak, also in Rochester.

As a young African American woman from a family of 17 children, Brown made the switch from Eastman Kodak to RIT, despite a dramatic cut in pay, because she knew RIT employees could attend classes for free.

“I always wanted to go to college, but I never had the finances to do it,” Brown said. “My story is unlike most others in higher education. I didn’t start working on my associate degree until I was 33. I grew to love what higher education does, how it advances your life and how important new knowledge can change your perspective. It creates you into the individual you always hoped to be.”

Brown began as an administrative assistant at RIT and over the years worked her way up into various higher jobs. Then an undergraduate research paper she had written on the importance of promoting an inclusive environment caught the attention of RIT’s then-President Albert Simone, who was putting together a commission for promoting pluralism.

He told Brown that he wanted her to head the commission, but at that point she did not have the master’s degree she needed to qualify for Simone's appointment. After she finished her master’s in one year, the job was waiting for her.

“Dr. Simone gave me an opportunity that I didn’t expect,” Brown recalled. “He saw potential in me that I didn’t know that I had. I grew into this area of diversity, with deep values of change and confidence in making a difference in the lives of others.”

After 12 years in her position at RIT, changes in the administration caused Brown to look for other opportunities and the position at Kent State presented itself.

Even before Kent had a dedicated division for diversity, Brown said the university had always been a champion for African, Latino and Native American students, noting how students of color were attending Kent State long before they were noted at most other public universities.

“I absolutely love Kent State. It’s a wonderful, wonderful place to work. I have learned so much from the people, who are insightful and care about what they do. Diversity means something at Kent State, and you don’t find that at every university,” she said.

Brown’s husband, Lawrence Brown, who is retired from the military, also works for the university as a director in Facilities Planning and Operations. When he leaves his job at the end of July, the pair will be relocating to North Carolina, where they already have built a new home.

Together, they have six grown children and 14 grandchildren.

Brown’s plans for retirement include writing a second book. Her first book, the inspirationally themed "Word Up," was published in 2013, and was born out of her daily emails to her three children.

A devout Christian, Brown felt that her children as young adults were moving away from their faith and she wanted to send them a daily reminder to think about their actions and the decisions they were making.

She sent the email every day at 5 a.m. with a passage of scripture and an inspirational essay, to ensure that it would be the first thing they saw each morning. After a year, she realized she had a lot of copy and perhaps she could pull the short stories together into a book.

Brown plans to focus her next book on the topic of healing, based in part on her sister’s struggle with multiple myeloma, and watching her endure two rounds of chemotherapy over two years.

“We all need healing right about now,” she said.

Brown was raised with nine sisters and seven brothers, most of whom are still living, except for one brother who died in 2019. Since 1993, all 10 sisters have a conference call every weekday at 5 a.m. to pray together as they stay on top of happenings in their respective families and for others who have asked them to pray on their behalf.

“We questioned, after the passing of our Mom many years ago, who will pray for us if we aren’t praying for ourselves and others who need it?” Brown said. “The prayers keep us close. No matter where we lived, what city or state, distance will not separate us. With such a large family, the 'SisterPrayer' as it was named in 1993, really helps us to engage and support each other across all of our individual families.”

As her days at Kent State come to a close, Brown is reflective on her time at the university and the work the division achieved and, most important, what she sees in the future for the division at a time of shrinking budgets and expected staff cuts due to the economic fallout of the pandemic. Brown said the division will likely become smaller, but she hopes her successor will continue to view the holistic nature of diversity, equity and inclusion.

She hopes her successor will continue to see the whole picture of diversity, equity and inclusion.

“The inclusion piece is really, really important,” she said. “As I reflect on the University Diversity Action Council, a group of approximately 120 people, I will always appreciate their efforts as change agents. We did not turn anyone away who needed us, and we did not turn our back on any problem. I love Kent State because Kent State is a caring community and there are many who are so open to the concept of care.”

And Brown plans to continue that care as part of her life’s work, too.

“What matters is taking care of people,” she said. “I love this work and will continue it the rest of my life. The work will never stop. It’s so much a part of who I am.”