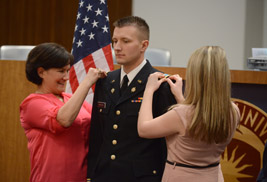 David Herchick and John Richards, two Golden Eagle Battalion cadets from Kent State University’s Army ROTC program, were recently commissioned as second lieutenants during a ceremony that took place in the Governance Chambers at the Kent Student Center on Dec. 13. The commissioning ceremony marked a major step in the army career of both Herchick and Richards who will be moving on to serve in the National Guard.

“It feels great to complete a program that does such an excellent job of producing officers in the United States Army,” Herchick says. “Now being commissioned, I am anxious to take these new skill sets and put them to test at my new assignment.”

“I am extremely excited to start my career as an Army Transportation officer, and I’m honored to be able to serve my country with some of the best men and women in the world,” Richards says.

Joe Paydock, a retired lieutenant colonel, served as speaker at the event and encouraged the newly commissioned officers to never make the same mistake twice as a way to stay on the right track in their military career. In attendance at the ceremony were families of the newly commissioned officers, cadets, cadre and staff of the Golden Eagle Battalion. 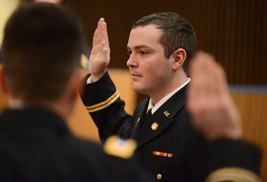 “These two officers are the first two cadets to commission from year group 14, and they are great examples of the quality leaders the ROTC program produces,” says Lt. Col. Mark Piccone, professor of military science with the Army ROTC at Kent State. “Out of 16 officers who will commission in year group 14, we had two finish in the top 10 percent of cadets nationwide and 15 finish with a GPA above 3.0; seven actually had a GPA above 3.5.”

Piccone describes the year group 14 class as one of the best he has had the honor to commission since he began serving as head of the ROTC department at Kent State in 2011.

“Every one of them has excelled in the ROTC program, which takes discipline, drive and a lot of determination, while attending a great university and completing the requirements to graduate with the bachelor’s degree,” Piccone says. “This accomplishment isn't something that just anyone can do.  Many students attend the freshman- and sophomore-level ROTC classes and realize that ROTC isn't for them or that the workload is too difficult. This outstanding group of cadets found the drive and had the desire to stick with the program, and they are great young leaders because of it.”

Herchick and Richards will complete their Basic Officer’s Leadership Course, following which they will be posted to their respective units; Herchick in military intelligence and Richards in transportation.

Since inception in 1947, the Army ROTC Program at Kent State has commissioned more than 1,200 second lieutenants into the U.S. Army.

For more information about the Army ROTC program at Kent State, visit www.kent.edu/armyrotc.