Kent State University student-athletes continued to raise the bar in the classroom, making the spring of 2013 their best semester in recorded history. 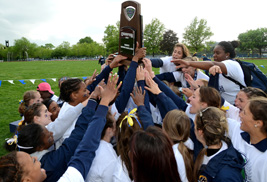 Kent State University student-athletes continued to raise the bar in the classroom, making the spring of 2013 their best semester in recorded history. The department’s cumulative grade point average is also at an all-time high, while six teams broke program records.

Of the nearly 400 student-athletes at Kent State, 61 percent had a spring grade point average of 3.0 or higher, helping the department to a term record 3.11 GPA. More impressively, 36 percent of Golden Flashes had term GPAs of 3.5 or better, while 24 individuals posted a perfect 4.0.

The 23-member softball team’s 3.71 was the highest semester GPA by any team in the department’s history, which included 19 members netting a 3.5 or better. Gymnastics (3.49), football (2.84) and women’s track and field (3.40) all set new program records for term GPAs. Wrestling (3.03) tied a program term record, while baseball (3.06) shattered a spring semester record.

“The academic profile of Kent State University continues to rise, as does the academic caliber of the student-athletes our coaches are recruiting,” says Assistant Athletic Director for Academic and Student Services Angie Hull. “This past year, we were able to increase the amount of athletic academic counselors serving our student-athletes and also launch new programs to assist their academic transition to college.”

Prior to the spring of 2012, the Golden Flashes never recorded a collective 3.0 in a term, but that milestone has now been reached in three straight semesters.

Kent State also continued its success on the playing fields and in the arenas during the 2013 spring semester. The women’s track and field team won conference championships in both the indoor and outdoor competitions. Men’s and women’s golf each defended their conference titles. Baseball won a MAC regular season crown, while softball won a MAC East title. Men’s track and field claimed indoor and outdoor runner-up finishes at the MAC Championships and wrestling finished second in the conference standings.