Battle for the Wagon Wheel Trophy on Nov. 3 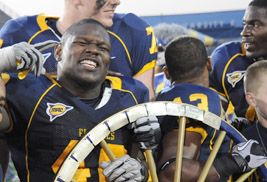 Kent State University and the University of Akron renew their annual rivalry at 2 p.m. on Saturday, Nov. 3, at Dix Stadium when they meet in the 42nd battle for possession of the Wagon Wheel trophy.

The wagon wheel currently resides with Kent State on the basis of the Golden Flashes' 35-3 win at Akron last season.

That Nov. 12, 2011 game was also Kent State head coach Darrell Hazell's introduction to the Zips rivalry and the trophy the schools have vied for since 1946. Kent State holds a 21-19-1 lead in the series.

"Any time you get into a rivalry game, all of the records are thrown out," says Hazell. "It's a game of will. At the end, it is a game of execution. I know Akron will be well prepared for this contest."

Having a tangible prize at stake only adds to the excitement when Kent State meets Akron. As the most accepted legend has it, the wheel came off of a wagon owned by John R. Buchtel when it was stuck in the mud during a search for the site of a new college in the spring of 1870. While the incident took place near what is now Kent State University, Buchtel settled on a site in Akron. Buchtel College eventually became the University of Akron.

So there is some shared history behind the wagon wheel, which was unearthed in 1902, "and we'll talk about that quite a bit this week," says Hazell. "Keeping that wagon wheel is huge for us. Our players put everything into that rivalry game because they understand winning means that, for the next 365 days, they can walk around with some pride knowing they kept the wagon wheel in Kent."