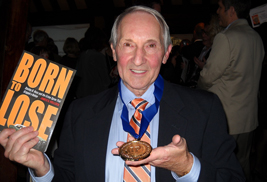 “We’re proud that the true crime story Born to Lose earned us our first gold IPPY,” says Will Underwood, director of the Kent State University Press. “First-time author Jim Hollock did a splendid job of telling the gripping tale of how a small-time hood became one of the FBI's most wanted. The biography of Jim Tully is a wonderful read about a colorful and influential American author. It was over a decade in the making, and we’re pleased to see it get this well-deserved recognition."

Born to Lose is about Stanley Barton Hoss, a burglar, thief and local thug from the Pittsburgh area, who became the subject of an intense nationwide manhunt, and one of the FBI’s 10 Most Wanted. The book also was a finalist for the 2012 American Library Association Awards.

Hollock says like most would-be authors, he received an alarmingly high number of rejections before his manuscript was accepted by the Kent State University Press where he was impressed by the level of professionalism and quality of books produced.

“There was nothing better than to see the manuscript come to book form, and then to learn that Born to Lose was up for special recognition,” Hollock says. “Particular to the finals of any keen competition, I was more than honored to be in the same room, as it were, with such gifted writers. The judges’ votes had to be close, and any differences razor thin, so for my book to win the gold medal I was altogether transported.”

Bauer and Dawidziak’s book chronicles the life of Jim Tully, the vagabond and hard-boiled writer who rocked Hollywood in the 1920s. Tully, a native of St. Marys, Ohio, penned several stories about his years on the road as a drifter.

“This recognition was an unexpected surprise,” says Bauer. “The manuscript made the rounds of New York publishers for years before finding a home at Kent State University Press. Without this independent press, I doubt this book would exist. So, it's especially gratifying to be recognized by this group of independent publishers.  I really believe that the future of publishing rests with independent, scholarly and regional presses.”

A total of 5,203 submissions were entered for the 2012 IPPY awards – 4,813 print book entries and 390 e-book entries in 72 categories – the largest in the awards’ history. Of that number, only 372 finalists received IPPY medals.

To learn more about Hollock’s Born to Lose, visit www.kentstateuniversitypress.com/2011/born-to-lose.

To learn more about Bauer and Dawidziak’s biography of Jim Tully, visit www.kentstateuniversitypress.com/2011/jim-tully.

For more information about the Independent Publisher Awards, visit www.independentpublisher.com.+