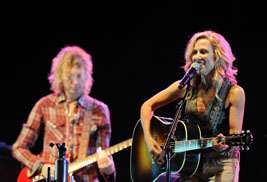 Sheryl Crow, O.A.R. and Los Lonely Boys performed at Kent State University’s Centennial Campaign Concert on Sept. 8. Held at Dix Stadium, the Centennial Campaign Concert served as a celebration of the conclusion of Kent State’s Centennial Campaign, a $250-million fundraising effort timed around the university’s 100th anniversary in 2010, and the largest campaign in Kent State’s history. The university exceeded its goal, raising more than $265 million for endowment, capital projects and current operating funds, with emphasis on student scholarships. The concert was presented by the Kent State University Foundation, a not-for-profit entity that is legally separate from the university, along with Acorn Alley and Main Street Kent.

A portion of ticket sales from the Centennial Campaign Concert go directly to support Kent State’s Campaign for Change Scholarship Fund, the university’s student philanthropy initiative, kicking off the next round of fundraising for student scholarships. The Campaign for Change enlists student volunteers to educate their peers about the impact of private support on their education and to encourage students to “pay it forward” supporting an endowed scholarship fund. Since its launch in 2007, the Campaign for Change has raised more than $65,000 from students, parents, faculty and staff. Student gifts range from as little as $1 to as large as $200. In 2009, the fund reached the $25,000 threshold required to endow it, meaning Kent State students have left a legacy that will aid their peers, current and future, in perpetuity. For more information about Kent State’s Campaign for Change Scholarship Fund, visit www.campaign-for-change.org.