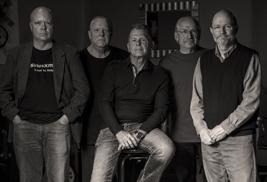 Clapton Tribute: Evolution and special guest Brimstone are onstage at the Performing Arts Center at Kent State University at Tuscarawas on Oct. 12at 7:30 p.m.

Through the years, Eric Clapton has been a major influence and icon who inspired artist Christopher Wintrip. To pay honor to this legendary performer, Wintrip formed Evolution, an Eric Clapton tribute band. This performance will cover Clapton’s musical career performing hit songs from The Yardbirds, Blues Breakers, Cream, Blind Faith, Derek & the Dominos, as well as Clapton’s solo career.

Also performing will be Brimstone, a well-known Canton-based band that is reuniting for this performance. The band evolved in 1970 from a combination of several traditional rock bands and performed in a variety of venues with other major artists, including Lynyrd Skynyrd, Harry Chapin, Peter Frampton, the Climax Blues Band and Renaissance, among others.

“It has been nearly 40 years since we have performed together,” says Andrews. “We are looking forward to performing songs from our album, Paper Winged Dreams, and several pieces that have never been recorded or released.”

Paper Winged Dreams is a unique progressive-art-rock work with influences from a wide range of music genres. Brimstone’s ambitious effort focuses on ensemble collaboration, lyrical content and vocal harmonies resulting in a delicate, introspective outcome. They have been recognized as Rock and Roll Hall of Fame Honorees in the My Town Display.

Tickets for Evolution and Brimstone range from $10-$20 and can be purchased now at the Performing Arts Center box office, online at www.tusc.kent.edu/pac or by calling 330-308-6400. The box office is open Monday through Friday, from 8 a.m. to 5 p.m. Free parking is available for all shows.