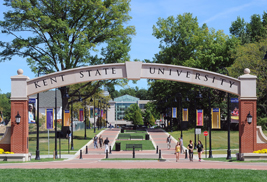 A community celebration of the solid partnership between Kent State University and the city of Kent, represented by the new Kent State University Esplanade extension that now connects the university to downtown Kent, will take place Friday, Oct. 4, starting at 3:30 p.m. The celebratory event will be held, rain or shine, at the new University Esplanade arch near Main and Willow streets in Kent. It is free and open to members of the public, and refreshments will be served.

The University Esplanade is built around the economic development of downtown Kent, and is a vital connection between the university and downtown projects that include PARTA’s new Kent Central Gateway multimodal transit center, private developments from Acorn Alley and Fairmount Properties, and the new Kent State University Hotel and Conference Center. It also provides a physical link and safe pathway for students to visit, enjoy and patronize local businesses; connects residents and visitors to the Kent Campus; and serves as a catalyst for changing the economy of the region by creating new jobs, spurring new investment and generating taxes to the state and local economy.

The celebration and official opening of the University Esplanade on Oct. 4 will begin with remarks from university, city and government officials. It will include the dedication of a newly planted pin oak Partnership Tree, generously donated by the Kent-based Davey Tree Expert Company, that symbolizes the town-gown partnership. Also on display at the event will be the Partnership Tree float that is modeled after the new University Esplanade arch and Partnership Tree. From 4-6 p.m., following the dedication and tree planting, attendees will have the opportunity to be a part of the float by signing their names and writing personalized messages on handcrafted leaves, which will then be hung on the Partnership Tree parade float. The float will be in Kent State’s Homecoming Parade on Oct. 5 at 11 a.m.

Kent State is making one of the largest investments related to higher education in the region and in Portage County. The university’s “Foundations of Excellence: Building the Future” initiative includes the construction of new buildings, facility upgrades to existing buildings and the creation of dynamic, new spaces at its Kent Campus and Regional Campuses.

For more information about the “Foundations of Excellence: Building the Future” initiative, visit www.kent.edu/foundations.