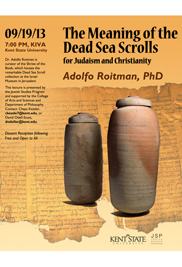 Adolfo Roitman, Ph.D., curator of the Shrine of the Book, which houses the Dead Sea Scroll collection at the Israel Museum in Jerusalem, will speak about “The Meaning of the Dead Sea Scrolls for Judaism and Christianity” at Kent State University on Thursday, Sept. 19, at 7 p.m. in the Kent Student Center Kiva. A dessert reception will follow the lecture. The event is free and open to the public.

The lecture is presented by Kent State’s Jewish Studies Program, with support from the College of Arts and Sciences and the Department of Philosophy.

“It’s very exciting when we can host a world-class scholar at Kent State, especially on a topic that has a wide appeal and profound historical and archaeological implications,” says Chaya Kessler, director of the Jewish Studies Program at Kent State. “Dr. Roitman is a dynamic speaker with an encyclopedic knowledge of the history of the Dead Sea Scrolls, from discovery to storage, as well as the extensive scholarship that has taken place surrounding the scrolls. Anyone that has an interest in the significance of the Dead Sea Scrolls should make it a point to attend his lecture at the Kiva on Thursday, Sept. 19, at 7 p.m.”

Roitman, a senior lecturer at the Schechter Institute of Jewish Studies in Jerusalem, lectures widely on early Jewish literature, the history and significance of the Dead Sea Scrolls and biblical interpretation. He also has served as a visiting scholar at universities across the United States and Central and South America.

He is the author of several books about the Dead Sea Scrolls, including The Sectarians from Qumran: Daily Life of the Essenes (Barcelona: Ediciones Martínez Roca, 2000, in Spanish) and A Day at Qumran: The Dead Sea Sect and Its Scrolls (Jerusalem: The Israel Museum, 1997).

An ordained conservative rabbi, Roitman earned his Ph.D. in Ancient Jewish Thought at the Hebrew University of Jerusalem in 1993. His fields of research include comparative religion, anthropological science and art history. He is a member of the World Union of Jewish Studies and the Society of Biblical Literature.

For more information about the lecture at Kent State, contact Kessler at ckessle7@kent.edu or David Odell-Scott at dodellsc@kent.edu.