Department of Public Safety Announces 2011-2012 Employees of the Year 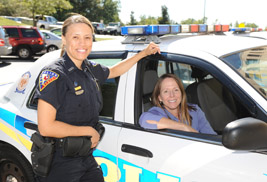 The Department of Public Safety recently announced its 2011-2012 Employees of the Year at its annual meeting in August.

“The successful nominee is selected based on personal traits that include dedication, professionalism, teamwork, sensitivity to the needs of the community, productivity and high ethical and moral standards,” says Jan Hetzel, administrative assistant with the Department of Public Safety. “Public Safety Director John Peach reviews each nomination and makes the selections that are then presented at the Public Safety department’s annual meeting.”

This award is different because of the selection process.

“What’s so special about this award is that it is peer-nominated,” says White. “Everyone’s nominations are submitted to Chief Peach, who then reviews them and selects the awardees from the submissions.”

This is the second award for both Penn and White and both recipients say they are grateful to their co-workers for the recognition.

“I was very touched and moved to receive this award because I received it before,” says Penn. “It meant even more to me because it came from my co-workers. Everyone works very hard here.”

White agrees with Penn and says there are many others who contribute to the success of the department.

“I was shocked to receive the award,” says White. “Everyone here works hard, and it is a wonderful department to work in. We were selected out of an amazing pool of candidates.”

Penn has worked for the department since 2006, and White since 2007. The Department of Public Safety has been awarding this honor since 1993. Both Penn and White received certificates. A plaque with their names engraved on it is also placed in the Stockdale Building lobby.

For more information about the Department of Public Safety, visit www.kent.edu/publicsafety/index.cfm.