Easing the Financial Burden on Students

Psychology Professor David Riccio, Ph.D, knows better than most how today’s students struggle to afford the cost of education. 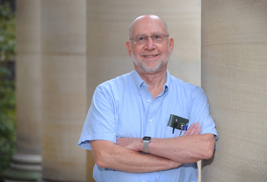 Psychology Professor David Riccio, Ph.D., has had one job since he graduated from Princeton University nearly 50 years ago – teaching and conducting research at Kent State University. That is nearly half of Kent State’s 100-year history. Riccio knows better than most how today’s students struggle to afford the cost of education.

Riccio has been publishing papers, writing books and conducting research since he first understood what psychology was. After completing his degree, Riccio served as a 1st Lieutenant in the United States Army. He transferred and completed his tour of active duty in the Navy, researching the effects of vestibular stimulation on the behavior of animals and participating in the NASA/Navy-sponsored biosatellite project.

Widely respected by students and colleagues alike, Riccio is a fellow in both the American and Midwestern Psychological associations, and has served as president of the latter. At Kent State, he has been the recipient of both the Distinguished Teaching Award and the Distinguished Scholar Award. Last year, 30 of Riccio’s former students returned to campus to celebrate aFestschrift in honor of his 46th year at the university. Festchrift, a German term for “Celebration of Scholarship,” is usually celebrated upon an honoree's retirement or other notable career anniversary. At Riccio’s Festchrift, former students presented scientific papers that were collected and made into a book celebrating both their own and their mentor’s successes.

Riccio was lucky enough to attend private schools himself, spending his undergraduate years at Middlebury College in Vermont before earning his doctorate at Princeton. “My father had to work his way through school, and felt that he missed a lot of things, so he made sure that I didn’t have to,” says Riccio. “Education is so important to people, we should make it as affordable as possible, which the state isn’t doing. So it falls to the university and donor support.

“State support has decreased atrociously,” says Riccio, who in his time at Kent State has watched state aid to the university dwindle to a trickle. “Students desperately need help. Anything that eases that burden is important. I see too many students struggling to get to class because maybe they’re a single parent, or they’re working – I don’t know how they do it.

Like the true mentor that he is, Riccio takes satisfaction in the lessons his students teach him.

“Sometimes, the students ask very interesting questions,” he says. “There is a line of research that we’ve been doing for 15 or 20 years now, that started with a graduate student asking me a question that I really couldn’t answer sufficiently. It turned out that there was a contradiction in research that other people hadn’t spotted. We ended up writing several papers about this paradox, and it was the basis for grant-supported research.” The issue is still being debated in academic circles and Riccio loves every minute of it.

At Kent State, generous alumni, faculty and staff have created hundreds of funds that provide much-needed financial support to students who struggle daily to afford the cost of a college education. Please consider making a gift to support the Department of Psychology, The Last Dollar Fund, on your campus, or one of literally thousands of other giving options, such as The Campaign for Change.

Click here and learn about other ways to put your money where your heart is.