Dhruba Panthi, Ph.D., assistant professor of Engineering Technology at Kent State University at Tuscarawas, is this year’s winner of the Farris Family Innovation Award, which supports the research of tenure-track faculty members who have not yet reached tenure.

Panthi said he will use the monetary award to further his study in hydrogen production and electrochemical reduction of carbon dioxide, using high-performance solid oxide electrolysis cells.

His research focuses on hydrogen fuel because its only byproduct is water, which is harmless to the environment, unlike other fuels that result in carbon dioxide emissions that pose a great environmental threat.

“Given the current environmental crises being experienced worldwide, Dr. Panthi’s research into hydrogen fuel cell technology and clean energy couldn’t be timelier or more needed,” said Douglas Delahanty, Ph.D., interim vice president for Research and Sponsored Programs. “It is this kind of research that has real-world, public health significance that the Farris family is supporting.”

The Farris Family Innovation Awards specifically support the research of yet-to-reach-tenure faculty members who have shown promising drive for their field of study. 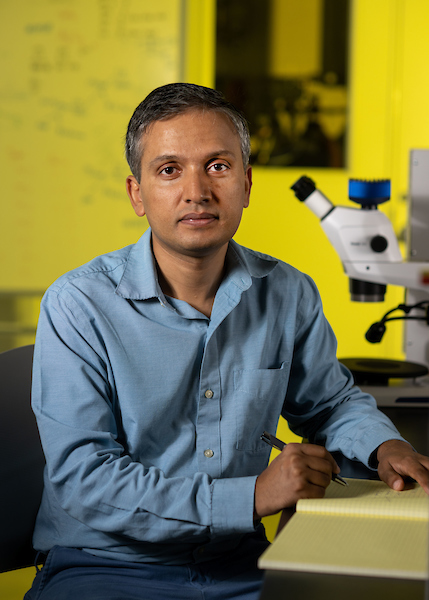 working for two years as a post-doctoral researcher in the laboratory of engineering professor Yanhai Du, Ph.D. He earned his doctorate in 2014 in mechanical engineering from the University of Tokyo, Japan, with a specialization in fuel cells and energy process engineering. In 2018, Panthi was hired as an assistant professor of engineering technology at Kent State’s Tuscarawas Campus.

Panthi teaches a wide range of engineering technology courses, specializing in mechanical engineering and green and alternative energy sources, which is the focus of his current research.

One of the main drawbacks of hydrogen fuel is its high cost, which, Panthi said, represents a dilemma: If the fuel is expensive, no one will use it, and if no one uses it, hydrogen fuel will remain expensive. The current cost of hydrogen fuel for end users is more than $10 per kilogram, Panthi explained.

Another issue is developing a ready network of fueling stations. Hydrogen can be used to power cars – electric vehicles that run on hydrogen already exist – but fueling stations are not readily available, he said.

For hydrogen fuel cells to one day replace gasoline in our cars or provide clean fuel for other applications, it will have to be cheaper and there needs to be an extensive network of hydrogen fueling stations available, Panthi explained.

For more than 10 years, Panthi and his collaborators focused on the fuel cell side of the research. Now in addition to focusing on the use of hydrogen as a fuel, he is looking at the use of water or water plus carbon dioxide to cleanly produce hydrogen and synthetic hydrocarbon fuels.

Currently, 95% or more of hydrogen produced comes from natural gas – a fossil fuel that is not clean energy. The challenge is to create cleaner ways to produce hydrogen, which is where Panthi’s current research is focused.

“My goal is to use a high-temperature electrolysis technology to produce hydrogen,” Panthi said. “If you have water, you can get hydrogen by splitting the water into hydrogen and oxygen. Another way is to use hydrogen and carbon dioxide to get synthetic hydrocarbon fuels. But we need a way to trap the carbon dioxide and convert this bad stuff to good stuff.

“The technology is there, it’s not an entirely new thing, but it’s under-researched. My research is to improve the technology so that it can have practical applications.”

The Farris award will offer financial support for his work for up to three years, or less if Panthi receives tenure before then.

“Primarily, this award will help with the proof-of-concept results at this phase. This is a long-term project, and I will need to look for additional research money to continue this work,” he said.

The current climate for hydrogen research is a favorable one.

In June 2021, the United States Department of Energy launched its “Energy Earthshots Initiative,” which aims to accelerate breakthroughs of more abundant, affordable and reliable clean energy solutions within the decade. The first Energy Earthshot – Hydrogen Shot – seeks to reduce the cost of clean hydrogen by 80% to $1 per one kilogram in one decade, or the "1-1-1 Plan.”

Panthi said he is hopeful that research funding for his work will be available in the future, particularly because of the “1-1-1” program, as well as federal money in the Infrastructure Investment and Jobs Act that was earmarked for the development of regional clean hydrogen hubs.

“There are some exciting activities going on, so I am hoping it will be timely research,” he said.