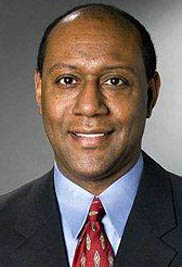 Dwayne Bray, senior coordinating producer for ESPN, will visit Kent State University in November to share insight into how ESPN manages to balance its journalistic duties and its business relationships with the top sports leagues and conferences whose games it broadcasts.

Bray, who oversees reporters for ESPN's well-respected "Outside the Lines" and “SportsCenter” programs, will share some of his team's work and "give the 30,000-foot view of ESPN, including newsgathering, production and competing in today's media world."

The lecture is set for 2:15 p.m. on Monday, Nov. 5, in the FirstEnergy Auditorium in Franklin Hall. It is free and open to the public. Kent State students will tweet live from the event using the hashtag #brayatjmc.

“It is an important part of our ongoing diversity initiative to expose our students to successful minorities who can serve as role models in the professions they are studying,” says Thor Wasbotten, director of Kent State’s School of Journalism and Mass Communication.

“Dwayne is a friend and former boss of mine,” says Sue Valerian, an adjunct instructor in the School of Journalism and Mass Communication, who helped arrange Bray’s visit. “Several of my students want to go into sports broadcasting or write about sports. Either way, Dwayne has experience in both areas. And today, the lines are blurred between print and broadcast. Students need to be proficient in both writing and shooting video. Dwayne's experience can help students learn about what it means to be a sports journalist today. And really, what it means to be a journalist in any area.”

Valerian hopes Bray’s presentation will give students perspective, knowledge and insight into what it takes to do good journalism.

“I hope Dwayne helps students understand that they have to be a student of the news and use judgment and instinct to succeed,” Valerian says. “Dwayne is a good role model for aspiring young journalists. He’s grounded but ambitious. He's street smart and book smart. He's a terrific journalist who's passionate about great stories and uncovering the truth.”

Bray is an East Cleveland native.