The Firefighter and the Philosopher

What’s the most unique friendship you’ve ever seen? 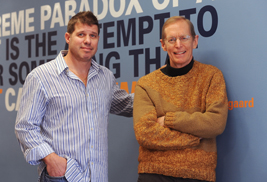 What’s the most unique friendship you’ve ever seen? The 500-pound gorilla who kept a kitten for a pet? Felix the neat freak and Oscar the cigar-chomping slob? How about a 45-year-old firefighter with three kids and a distinguished 60-something professor of philosophy?

When Professor Jeff Wattles first met nontraditional honors student Ron Balas, the reaction that occurred was akin to matter colliding with antimatter. Balas, a former Marine, has been a firefighter for the past 18 years. Prior to taking Wattles’ Aesthetics class, he had never bothered to reflect too long or too hard on his inner life. This became evident to Wattles when he read the first paper Balas turned in. The professor was, in a word, flabbergasted — and a little put off.

“His writing was just not there,” responds Wattles. “In [Ron’s] first paper, he included a joke, which made fun of the entire profession of philosophy. There was no respect. I got as tough as possible with him, and he responded magnificently.”

Balas explains, “My writing style is different due to my personality. It wasn’t ‘strict’ in terms of university standards. The professor was not happy with my paper.”

But Balas, as an honors student, is required to do extra assignments, so Wattles offered his time to help him once a week. Student and teacher both feel that the extra time they spent together permitted them to get to know each other better. Today, they consider themselves friends.

“Ron transformed himself before my eyes,” says Wattles. “He’s one tough dude— and very gifted. His writing took wing, and it was awesome to see the result. His writing just sang, and his personal synthesis and the values we were working with were superb and unforgettable.”

Wattles explains the exploration and discovery process. “There’s a skill dimension to it, and then there’s the process of accessing the soul. What I see over and over again are students who could never win an essay contest, but they get into these projects and they get involved, and their writing is publishable-quality stuff — because they’ve accessed that source of creativity.”

The unlikely pair has learned from each other in other ways, too. According to Balas, Wattles managed to “crack his shell” and made him look backwards and inward. Balas began to question whether he was a thrill-seeker. “After a fire, when it’s all done, the rush of it hits … then you get this calmness. The next time, you look for a little more of a rush and a deeper calmness. So, are you looking for the calm, or for the rush? It was interesting to question myself,” he says.

For his part, Wattles says that one of the best lessons on leadership he ever learned was from a man in the Army who told him that you can’t lead from the rear. “I always feel I should be doing the projects with people, and I notice that many of them go beyond me,” he says. “Then I realized I can’t be on the cutting edge of every facet of what I’m teaching simultaneously. I shouldn’t expect to be ahead of my students on all these dimensions because there are so many of them.”

Balas confesses that many of his firefighting brothers can’t figure out why he would want to go back to school to major in architecture when he is so close to retirement.

“In public they ask me why I’m spending money and time to do this. But in private they ask me what I’m learning in class, whether they should take some classes — things like that,” he says. “There’s not much use for an old firefighter. I don’t want to be 50, up on a ladder, swinging a hammer. I would’ve regretted it if I hadn’t finished my education. The degree will give me options — to work for myself or for someone else. Just because I retire doesn’t mean I stop working. It just means I don’t go to the fire station every day.”

Wattles sees the value of an education in more than just academic terms “It’s teamwork that is both quantitative and qualitative. Each needs the other. All the dimensions of a well-rounded education reinforce one another,” he says.

Wattles and Balas feel that financial support is important.

“Many students are very gifted, but life circumstances get in the way and prove to be disastrous. Or they don’t make wise decisions. Those are the kinds of people who could use some help,” Wattles says.

“It would be great if everyone had financial support. It takes some extra work to find the money that’s available out there, but it’s worth it,” Balas adds.

And what does the future hold for this “odd couple”? Wattles is retiring from Kent State so that he can finish his next book on the philosophy of life – living in truth, beauty and goodness. Balas will continue to work toward graduation and begin the second half of his life with new insights and a new friendship to guide him.

Opposites really do attract. Sometimes, it can even lead to enlightenment.

At Kent State, generous alumni, faculty and staff have created hundreds of funds that provide much-needed financial support to students who struggle daily to afford the cost of a college education. Please consider making a gift to support the Philosophy Department, or one of literally thousands of other giving options, such as The Campaign for Change or The Last Dollar Fund on your campus.

Click here and learn about other ways to put your money where your heart is.