In the spring of 2017, Sarah Matthews had a tough choice to make when a job offer arrived prior to graduation.

“I was told the office could not hold the position until my graduation date, and if I was interested I needed to move to D.C. as soon as possible,” Matthews said. “I jumped at the opportunity and moved to D.C. about a month before receiving my diploma, which meant I started my first job while simultaneously finishing up my classes online. It also meant missing the last few weeks of college with my best friends. It was a tough decision, but I knew it was the right decision in the long run.”

That first job was as Communications Aide/Digital Manager for the U.S. House of Representatives Committee on Homeland Security.

“I knew I wanted to work in communications or media relations and I always had an interest in politics,” she said. “Initially, much of my work was digital focused – running social media channels, taking photos, creating graphics, etc. I expressed interest to my boss in wanting to do more writing and working with reporters, which she granted, and I started to gain experience in more traditional communications.”

Matthews, who hails from North Canton, Ohio, and who earned a bachelor's degree in Public Relations, said that joining the Kent State College Republicans helped her realize she could combine her passion for public relations and politics into a career.

Matthews' first job lasted about a year as she sought a more traditional communications-focused role.

She found that by accepting the role as Press Secretary for the House of Representatives Committee on Energy and Commerce where she wrote press releases, speeches, op-eds and talking points while helping to strengthen relationships with the press to pitch stories while responding to their inquiries.

Still, Matthews admits there was a calling to be more involved in the race for the White House that was capturing the nation’s attention.

“As I grew as a communicator, I knew for my next job I wanted to get involved in the 2020 election cycle and was approached about an opportunity with President Trump’s re-election campaign,” Matthews said. “In June, 2019, I started as Deputy Press Secretary for Donald J. Trump for President, Inc. In this role, I served as an on-the-record spokeswoman for the campaign and traveled all around the country to the President’s rallies and various events for other high-profile surrogates.”

The new role in the president’s campaign meant an even more demanding schedule and a new tone to day-to-day public relations.

“This role was exciting because campaign communications are completely different from government communications,” Matthews said. “In a campaign, the gloves are off, whereas when I was working on Capitol Hill it was much more diplomatic.”

While working for the Trump campaign, Matthews met Kayleigh McEnany, who at that time was the campaign’s national press secretary. When McEnany left the campaign to become White House Press Secretary, she remembered Matthews and made her an offer to join the team.

“In June (2020) she poached me from the campaign and brought me on board at the White House as Deputy Press Secretary,” Matthews said. “In this role, I serve as a spokesperson for President Trump and spend a lot of my day working with the White House press corps. I also develop messaging strategy, prep Kayleigh for briefings, and staff the president for interviews.” 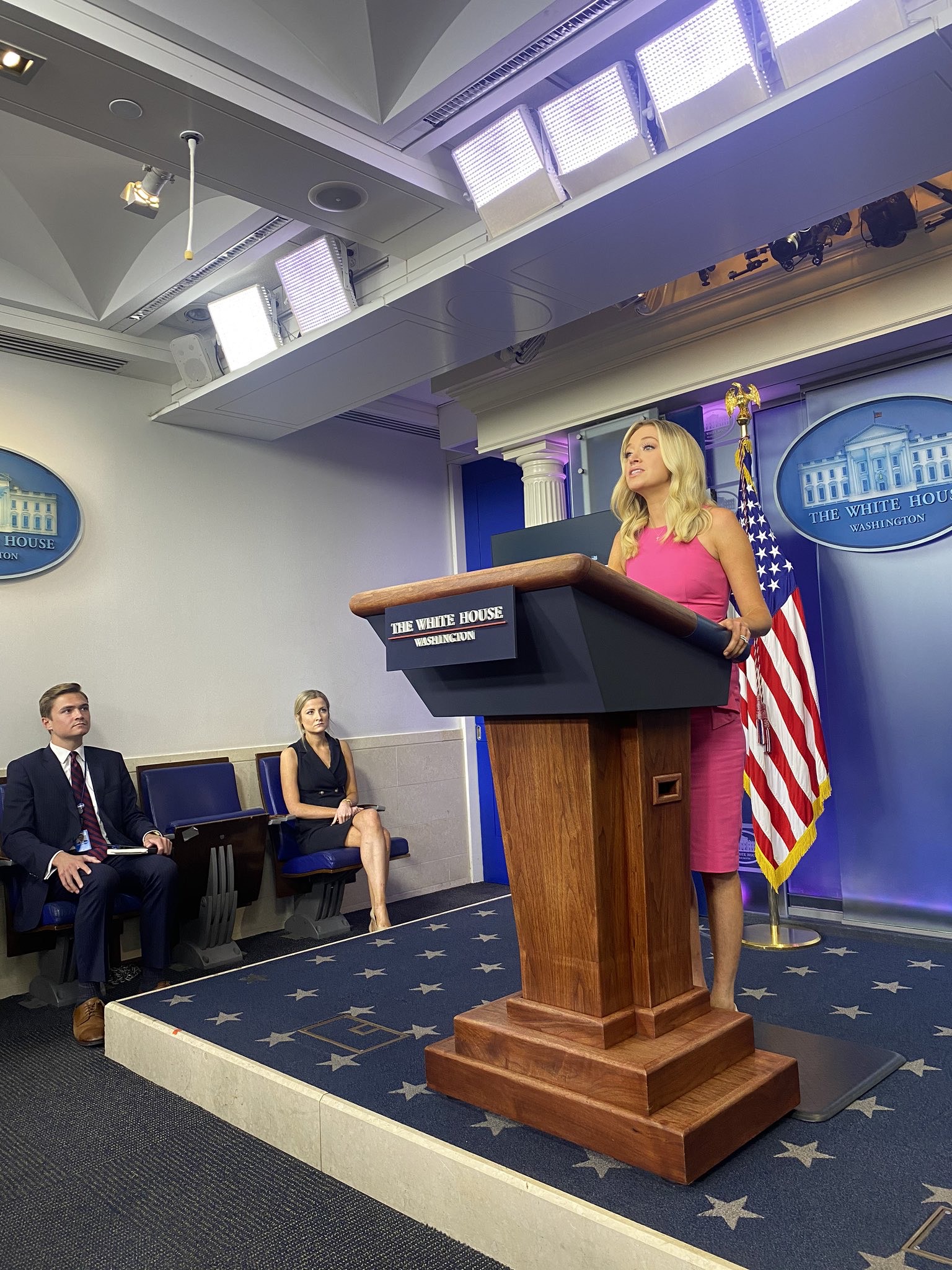 Viewers of White House briefings will sometimes see Matthews nearby during nationally televised news conferences, events that she admits take a great deal of preparation with her colleagues.

“As cheesy as this sounds, teamwork is everything,” she said. “For example, people may watch a White House briefing and not realize just how much work goes into it. From the binder of facts that Press Secretary Kayleigh McEnany wields to murder-board prep sessions beforehand to decide how to best answer tricky questions, every member of our team plays a key part.”

Matthews admits living in the 24/7 news cycle is demanding to say the least, but it’s also given her perspective for how stories impact the public.

In many ways, the job never takes a break, but Matthews says that developing good daily habits helps her stay on top of her responsibilities.

“It’s challenging to say the least but also exciting,” she said. “Working in a 24/7 news cycle means I’m never really ‘off the clock’ and keep my work phone attached to me at all times with the ringer on loud. To stay prepared, I read newsletters like POLITICO Playbook and others early in the morning, so I can see what news is driving the day. Then throughout the day, I’m constantly scrolling Twitter to see what reporters are tweeting about, and of course I have tweet notifications set up for the President.”

Matthews credits her time at Kent State with helping prepare her to hit the ground running as a communications professional.

“I think one of the most important classes I took during my undergrad was Print Beat Reporting because it helps me understand the mindset of reporters I work with and therefore be a better communicator,” Matthews said. “Thankfully, as part of the Kent PR program, you’re required to do an internship, which I think is the best way to prepare for the real world and learn new skills beyond the classroom. I did three internships during my time in college, and they gave me a sense of what the real world feels like, so I would recommend to students to do as many internships as possible and to keep in touch with the people you meet during your experiences.”

“If you’re specifically interested in political PR, I recommend getting involved with local campaigns,” she said. “Whether that’s by joining an on-campus organization like College Republicans/Democrats or volunteering for your local county party – volunteering on campaigns is a great way to start building contacts.”

Going forward, Matthews is thankful that what she brought to the table as a young professional was taken seriously.

“Every job I’ve held I was recommended to or hired by a woman. It’s encouraging that I’ve found a strong network of female mentors who have helped propel my career, and I would not be where I’m at today without their advice and support.”