Free Lectures from Renowned Printmaker and Sculptor in the Art Building, May 14 and 16

Kent/Blossom Art will present two guest lectures the week of May 13 as part of the 2013 Public Lecture Series. 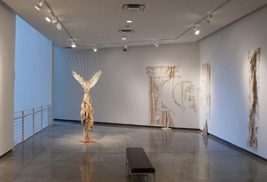 Kent/Blossom Art will present two guest lectures the week of May 13 as part of the 2013 Public Lecture Series. The series will feature printmaker Guillermo Trejo on Tuesday, May 14, and Thursday, May 16, it will feature sculptor Elana Herzog. All public lectures take place in room 202 of the Art Building at 6 p.m., and they are free and open to the public.

Trejo is originally from Mexico, where he studied at the National School of Painting, Sculpture and Etching in Mexico City. He also earned his MFA at the University of Ottawa. Trejo now teaches printmaking at the Ottawa School of Art.

Trejo has shown work in a variety of Ontario exhibitions, as well as in the Printmaking Biennal in Shanghai and “Full Memory” at the Mexican Embassy in Vienna, Austria. Trejo held a residency at Zygote Press in Cleveland in 2012. For more information about Trejo, visithttp://trejoguillermo.com.

Herzog creates impactful installations with materials, including textiles, staples and sheetrock. Her recent solo and two-person exhibitions have included shows at LMAKprojects, the Morgan Lehman Gallery and the New Britain Museum of Art.

Herzog earned her bachelor’s degree at Bennington College in Bennington, Vt., and her master of fine arts degree from State University of New York College of Technology in Alfred, N.Y. For more information about Herzog, visit www.elanaherzog.com.

The public lecture series gives the general public an opportunity to hear from the top artists in the fields of painting, sculpture, printmaking and ceramics. The Kent Blossom Art program also includes two-week intensive workshops in these areas of study, available at the undergraduate and graduate levels. For more information, visit http://dept.kent.edu/art or call 330-672-2192.