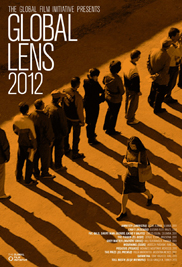 The Kent State University at Trumbull Office of Student Activities will present select films from The Global Film Initiative’s “Global Lens 2012” film series during the months of November and December.

The film series — a set of 10 award-winning narrative feature films from Albania, Argentina, Brazil, Columbia, Iran, Iraq, Morocco, Rwanda and Turkey — will screen selected features at Kent State Trumbull. The entire series will be shown at The Lemon Grove Café in Youngstown.

All screenings are free and open to the public at both locations.

“The lineup this year is really going to surprise audiences,” says Susan Weeks Coulter, board chair of the Global Film Initiative. “The cinematics are strong, the tone is fresh and the stories are thought provoking and unlike anything we’ve seen before.”

Global Lens, now in its ninth season, premiered at the Museum of Modern Art in January before embarking on its yearlong tour that includes full series screenings and festival presentations in more than 50 cities across the United States and Canada.

Click here to see show times for all films.

UPDATED: Saturday, December 03, 2022 01:02 AM
WRITTEN BY:
University Communications and Marketing