The No. 17 ranked Golden Flashes advanced to the match-play portion of the NCAA Championship and secured the highest finish in school history by tying for 5th in the nation 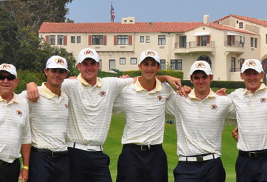 The 2012 season was certainly one to remember for the Kent State men's golf team. The No. 17 ranked Golden Flashes advanced to the match-play portion of the NCAA Championship and secured the highest finish in school history by tying for 5th in the nation. In the match-play quarterfinal, Kent State fell by a count of 3-1-1 to No. 2 Alabama.

The drama and excitement of the final day began early in the morning at Riviera Country Club when Kent State outlasted No. 19 Florida State in a one hole sudden death playoff to earn the right to play the Crimson Tide. The Golden Flashes earned the victory by a +2 to +3 score.  The big difference for Kent State was sophomore Kyle Kmiecik (Avon, Ohio) who had the only birdie amongst the 10 players.  Playing in the first five-some, Kmiecik set up the vital shot with a 5-iron from 199 that nestled in 12 feet from the hole.

Against Alabama, Kent State fell behind early but kept it close down to the end.  In the first pairing junior Kevin Miller (Dover, Ohio) was defeated by Justin Thomas 6 & 5. Kmiecik then fell to Cory Whitsett 5 & 4 in match number two.  With match two being controlled by sophomore Corey Conners (Listowel, Ontario) and match one featuring senior Mackenzie Hughes (Dundas, Ontario) even, the decisive third score was going to come down to match three between sophomore Taylor Pendrith (Richmond Hill, Ontario) and Scott Strohmeyer.