The Charles J. Pilliod Endowed Scholarships will be awarded each fall to two full-time students enrolled in the College of Business Administration at Kent State. 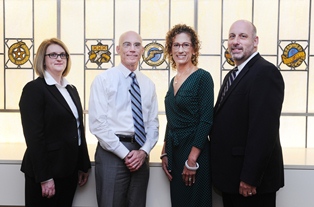 “Goodyear has been a long-standing partner with the College of Business Administration,” said Deborah Spake, dean of the college. “I am pleased that the scholarship will honor Mr. Pilliod who has been so supportive of our students.”

To be considered for the scholarship, students must have above average grades, play a leadership role in a student organization, demonstrate interest in international business, have work experience and be a sophomore or above in standing. Students may use the scholarship funds for tuition, room and board, university fees, books and supplies or study abroad travel expenses.

During Pilliod’s 42-year career at Goodyear, he was a staunch supporter of Kent State and its College of Business Administration. He was instrumental in creating the Goodyear Executive Professorship, which began in 1973 and has funded 20 professorships. Under the direction of Pilliod, the position was created to provide a bridge between the academic and business communities. Experienced corporate executives helped educate and enhance students’ coursework through “real-world” business experiences.

“We are thrilled to see our partnership continue,” said Kent State President Lester A. Lefton. “It’s a delight to be able to honor the remarkable legacy of Chuck Pilliod at both of these great institutions."

A native of Cuyahoga Falls, Ohio, Pilliod joined Goodyear in 1941 as a production trainee. After serving as an Air Force pilot in World War II, he rejoined the company in 1945 in its foreign sales operations. In ensuing years, he held leadership positions at Goodyear operations in 10 foreign nations. He was elected a vice president in 1967, became president of Goodyear in 1972, and chief executive officer and chairman in 1974.

Following his retirement from Goodyear in 1983, Pilliod served as U.S. ambassador to Mexico from 1986 to 1989.

“Chuck Pilliod was an early advocate of the importance of global business to Goodyear,” said Faith Stewart, community affairs manager at Goodyear. “During his career, this work was recognized by high honors in Belgium, Brazil, Great Britain and Luxembourg. We are pleased to recognize his career and his commitment to Kent State with these endowed scholarships.”

Goodyear, founded in Akron, Ohio, in 1898, is one of the world’s largest tire companies. It employs about 69,000 people and manufactures its products in 52 facilities in 22 countries around the world. For more information about Goodyear and its products, go to www.goodyear.com/corporate.

Those who are interested in establishing a scholarship can contact Gary Porto, director of advancement for Kent State’s College of Business Administration, at 330-672-8707 or gporto@kent.edu.