Kent State University student Antonina “Nina” Schubert has received a 2018 Courage Award from Ohio Gov. John Kasich in recognition for her work on campus to remove the stigma of mental illness and work to lessen suicide rates.

Gov. Kasich presented the award to Ms. Schubert during his final State of the State Address at Otterbein University in Westerville on March 6.

Ms. Schubert, 19, a freshman studying early childhood education, in the 2017 Fall Semester founded the Nightingale Project, a student organization working to end the stigma of mental illness and to help her fellow students cope with mental struggles. 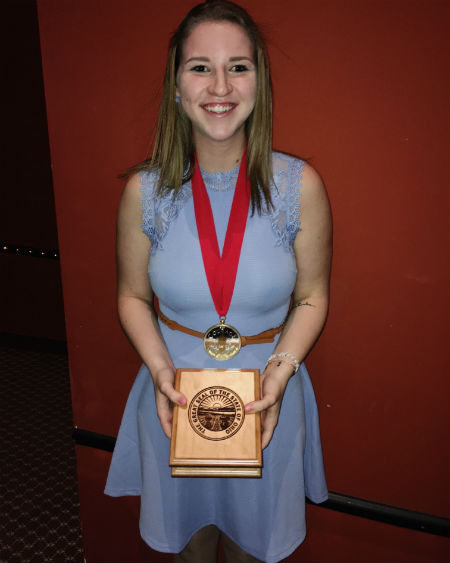 Ms. Schubert said she was overjoyed to be one of the recipients of the governor’s annual awards.

“For me, it’s just been an absolute honor and reinforced that the work I am doing is making a difference,” she said. “To get that acknowledgement from the governor … I think this will be one of my most cherished memories for the rest of my life.”

The Mentor, Ohio, native has battled depression, anxiety and severe bulimia since junior high. Her illness progressed while she was in high school to the point where she was suicidal. After several years of therapy and treatment, Ms. Schubert is recovering and healthy and has reclaimed a life that just four years ago she would have been happy to see end.

While counselors and therapists would preach recovery, being mentally healthy was difficult for Ms. Schubert to envision.

“When I was at my lowest point, I was thinking the world would be better off without me,” she said.

Adopted from Russia when she was 10 months old, Ms. Schubert experienced a happy childhood until age 9, when her father died of liver cancer. Her father’s death, coupled with bullying she received in school, combined to sow the seeds of depression at such a young age that Ms. Schubert said she was not even aware of it.

“I didn’t understand his death,” she said.

While her counseling and therapy are ongoing, Ms. Schubert said she now knows that healing is possible.

“This award and all I have going for me in life – this is the reason I continue to share my story," she said. "Recovery really does happen. The system works. It takes time. I have been in recovery for four years, but great things will happen if you continue to work at your recovery.”

When presenting Ms. Schubert with her award, Gov. Kasich said: “She’s an inspiring example of leadership at a young age on such a difficult issue. You know what? We love you, Nina, for the fact that you’re stepping up and stepping out and helping people to get their lives back.”

Jon Keeling, press secretary for Gov. Kasich, said the governor’s staff conducts its own research for the awards, often relying on stories they see in the media or suggestions they get from others, which they use to compile a list of possible winners. The governor reviews the list and makes the final selection of the winners, Mr. Keeling explained.

Ms. Schubert said when she first got a call from the governor’s office telling her about the award, she thought perhaps it was a prank. She even went so far as to contact her cousin, State Rep. Mike Duffy, R-Worthington, to ask if he could find out if the award was for real.

A few days later when an email from the governor’s office arrived, Ms. Schubert realized the award was official.

“They said they saw my work with the Nightingale Project and were all very impressed by it,” she said. “It’s still so surreal for me. This is an incredible opportunity and an amazing experience overall. It’s so incredible to be acknowledged, and this really encourages me to keep working on the organization and my own mental health as well.”

Ms. Schubert said a turning point in her recovery came when she received her acceptance letter to attend Kent State. She saw her college career as a way to make a fresh start in life. The Nightingale Project was her attempt to help bring mental health struggles out into the open, to allow people to talk about their problems without fear of being made fun of or chastised.

Ms. Schubert said the organization’s name was inspired by the lyrics of the Demi Lovato song “Nightingale,” which include these lines: “Can you be my nightingale? Sing to me. I know you're there. You could be my sanity. Bring me peace. Sing me to sleep. Say you'll be my nightingale.”

Ms. Schubert said the song first explained to her how the term could mean someone who is always there to offer help and support you “like a guardian angel.”

“I wanted the organization to reflect that," she explained. "To show people they aren’t alone. They have someone. They can go to you.”

Since its inception last fall, the organization has grown to more than a dozen students. The group meets every other Tuesday.

“We kind of tailor the meeting around what people want to talk about,” she said. Discussion topics might include ways to work on stress, how to work on beating depression, positive steps members can take to better themselves including taking time for fun activities, Ms. Schubert said.

The group focuses on how to improve grades and getting tutoring for group members who need it. The members also conduct service projects.

So far, members have made 46 blankets and have written encouraging notes to be distributed with the blankets, Ms. Schubert said.

She explained that group members hope the young patients will receive a blanket upon admission to one of the hospitals, so that they have a “soft space haven” to cling to while in the hospital.

“We want them to know that we see how hard they are working and how strong they are to work on recovery,” she said.

Ms. Schubert said she was encouraged when Cleveland Cavaliers player Kevin Love recently made his own mental health struggles public.

“For him to use his platform to speak up on mental illness can have such a big impact,” she said.

Mr. Love’s position as a professional athlete – men who have an image in society of being strong – makes his disclosure all the greater as it helps remove the mental illness stigma from men, who often are afraid to admit their struggles, Ms. Schubert said.

Ms. Schubert said her battle against mental illness is ongoing, and she wakes up every morning with the attitude that she wants to work on her recovery. She has gained perspective on many of her struggles, including dealing with her father’s death.

“I still think about him every day," she said. "But now I feel like he’s watching over me and seeing everything I am doing.”