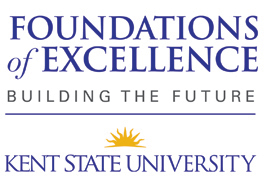 A groundbreaking ceremony for the new baseball and softball hitting facility is set to take place Saturday, Oct. 5, at 9:30 a.m. at Schoonover Stadium.

Members of the Kent State University administration and the athletic department will take part in the ceremony. Student-athletes and coaches of both the baseball and softball teams will also be on hand to kick off the construction.

“Both Dave and Tom understand the resources needed to ensure that Kent State baseball remains the preeminent baseball program in the MAC and have a constant presence in NCAA post-season play,” says Matthew Geis, senior associate athletic director and executive director of advancement. “The construction of this hitting facility is one more piece to transforming an already impressive Schoonover Complex.”

On a larger scale, the project is also part of the university's "Foundations of Excellence: Building the Future initiative." This campus transformation involves the construction of new buildings, facility upgrades and the establishment of dynamic, new spaces. The university has embarked on a major, multifaceted initiative to make each of Kent State's eight campuses everything a world-class, 21st-century campus should be, for the sake of the students, faculty, staff, alumni and the greater community enriched by the institution.

Changes to the Kent Campus are mirrored in the incredible renaissance of downtown Kent, strengthening the town-gown relationship and creating the enriching experience of a rising college town.

The hitting facility is part of continuing upgrades to the Kent State baseball facilities at Schoonover Stadium. In 2005, a field turf surface was installed, along with an underground drainage system, new dugouts, bullpens, backstop and outfield fencing. For the 2007 season, a home locker room, players' lounge, restrooms and concession stand were added. The updated scoreboard in right field was installed in 2008. Last season, Kent State baseball played night games after the addition of lights at Schoonover Stadium. The hitting facility and a new parking area for the 2014 season are made possible by both public and private funding.