Higher Education: A Culture of Mentoring

The teacher helps the student 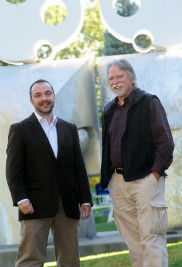 In the winter of 1995, Dino Baskovic (public relations, ’97) was struggling to figure out if he wanted to remain an architecture major. His academic advisor recommended he stay enrolled in general core classes during the exploratory phase of his college career. One of those classes was “Introduction to Journalism and Mass Communication.” For Baskovic, taking the class marked a serendipitous turning point.

Bill Sledzik, associate professor in Kent State University’s School of Journalism and Mass Communication, visited the class to give a presentation about public relations. After the class, Baskovic introduced himself to Sledzik, who offered to talk with him more about the profession and handed him his business card on which he had written his personal phone number. The quality of the presentation, coupled with Sledzik’s willingness to connect with him, led Baskovic to completely change his career aspirations. In Baskovic’s words, “I was hooked. I switched my major to public relations.”

Sledzik took notice of Baskovic’s activities, one of which included his hobby of coding websites in his residence hall room, an uncommon pastime in the mid ’90s. His tinkering gave Baskovic a competitive edge in his classes. According to Sledzik, “He was one of the most tech-savvy students in the entire school. He knew more than the faculty. Dino brought those skills into class and opened my eyes to what was possible.”

Baskovic flourished in his new major and became very involved with different initiatives and events around campus. His hectic schedule during his senior year led him to wait until the last minute to begin looking for an internship.

Sledzik recalls, “Mid-April, Dino called me and said, ‘I need an internship.’ At that point, we’d placed everyone, and the only opening I knew of was through an old friend of mine at a PR firm in Detroit.” Sledzik knew Baskovic would do well in the position. “The firm was looking for someone who had a PR degree and knew how to create Web pages because clients were starting to ask for it.” Sledzik phoned his friend and said, “Dino’s got a bit of an attitude, but he will teach you things.”

“It was supposed to be a three-month internship," Baskovic says. "It’s 2013, and I’m still in Michigan. Bill is to thank for that.”

“When I landed at the firm in Michigan, I thought it would be a typical internship — you know, making copies and answering phones,” says Baskovic. But after only three weeks, he was asked to sit on a General Motors executive panel for new technology because of his experience developing websites. Anxious about working with upper-level executives, Baskovic called Sledzik for encouragement.

“It was daunting, but Bill said ‘Duty calls, and you best be ready, using everything Kent prepared you for,’” Baskovic says.

Sledzik remembers that phone call, too. “I wasn’t worried about him. Dino is such a character. The minute he lands, he connects.”

The Student Becomes the Teacher

Baskovic’s career took on more of a digital focus. He was managing online content for clients and other agencies when social media first became popular.

“In 2004, Dino tells me ‘you need a blog.’ I wasn’t convinced. I didn’t think I had that much to say. Then in 2005, Facebook explodes. I finally saw that he was right, that I needed to be a part of the social–media conversation,” Sledzik recalls.

In September 2006, Sledzik took the plunge.

“Dino gave me the inspiration I needed, so one day I sat down and wrote the first post. Then the conversation began. Dino would give me little tips: be careful — don’t be too provocative early on; build your network; make sure you’re using own voice. Dino was pushing, cajoling and encouraging me along.”

“Bill and I were really validating each other after a while. It’s still humbling for me. I have a tremendous amount of respect for Bill. We talk almost every other day online,” Baskovic says.

At Kent State, generous alumni, faculty and staff have created hundreds of funds that provide much-needed financial support to deserving students. One such fund is the E. Zoe McCathrin Scholarship, which was created to provide support for high-performing public relations students who have made significant contributions to the Public Relations Student Society of America (PRSSA). The scholarship was created in 2002 by a contribution from McCathrin and several Kent State public relations students and faculty.

Please consider joining your colleagues in supporting the programs, students, faculty and staff members who make these mentoring relationships possible. Put your money where your heart is! Direct your support to the E. Zoe McCathrin Scholarship, the College of Communication and Information, the School of Journalism and Mass Communication or the school, college, department or program of your choice.

Click here to learn about other ways to give.