Porthouse Theatre, the outdoor, professional summer stock theatre located on the grounds of Blossom Music Center, closes its 2012 season with the Rodgers and Hammerstein favorite “The Sound of Music.” 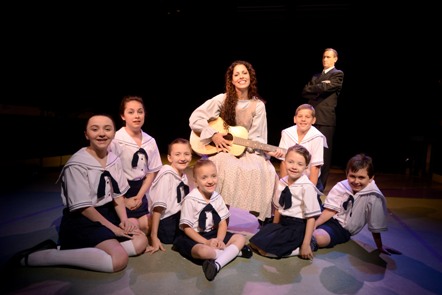 Many people know this uplifting family tale through the Oscar-winning film starring Julie Andrews, but the original Rodgers and Hammerstein Broadway musical is no less celebrated and timeless. With songs written by Richard Rodgers and Oscar Hammerstein II, the musical book is written by the writing team of Howard Lindsay and Russel Crouse, while Ernest Lehman wrote the screenplay. The musical originated with the book “The Story of the Trapp Family Singers” by Maria von Trapp. It contains many popular songs, including “Edelweiss,” “My Favorite Things,” “Climb Ev'ry Mountain,” “Do-Re-Mi,” “Sixteen Going on Seventeen,” “The Lonely Goatherd” and the title song.

The production is directed by Terri Kent, the theatre’s well-known artistic director whose work at Porthouse Theatre includes this season’s “Damn Yankees” and previous years with “Chicago,” “Bye Bye Birdie,” “The Music Man,” “Dames at Sea,” “Annie Get Your Gun” and “Oklahoma!” Most recently, Kent directed “A Chorus Line” at Kent State University and “Quilters” at Weathervane Theatre in Akron. Kent, who is a full professor, also serves as the coordinator of the musical theatre program for the School of Theatre and Dance at Kent State.

Kent teams up with Music Director Jonathan Swoboda, who often serves as a featured keyboard artist for Mannheim Steamroller. Swoboda has served as music director for more than 75 theatres and touring companies. He also served as resident music director at the Pacific Conservatory of the Performing Arts in California. He is currently on faculty at Kent State’s School of Theatre and Dance.

The production team is made up of Kent State alumni all coming back to their alma mater. Scenic design is by Nolan O’Dell, who lives in Florida and works at Douglas Anderson School of the Arts; lighting design is by T.C. Kouyeas Jr., who is now a professor at Frostburg State University in Maryland; costume design is by Sarah Russell, who serves as faculty at Ashland University; and sound design is by Brian Chismar, a recent Kent State graduate of the School of Theatre and Dance theatre technology program.

The cast is made up of 26 actors, four of them members of Actors’ Equity Association*, not to mention an ensemble of sisters made up in part by the Porthouse Theatre College Academy members.

Kayce Cummings* of Nashville, Tenn., stars as Maria. Audiences will remember Cummings as Annie from “Annie Get Your Gun,” Marian in “The Music Man,” Maria in “West Side Story” and Laurie in “Oklahoma!” Cummings worked for Walt Disney Productions where she played such parts as Belle in “Beauty and the Beast” and on such shows as “Saved by the Bell.”

Larry Nehring* of Cleveland, stars as Captain Georg von Trapp. He is an area actor, director, choreographer and sign interpreter. Most recently, he was seen in “Seafarer” at Dobama Theatre. He has performed all around Cleveland and Akron.

Lisa Kuhnen* of New York, N.Y., plays Elsa. Lisa has been seen in numerous productions at Porthouse Theatre. She appeared in the national tour of “Cats” and also has performed at Cleveland Play House, Great Lakes Theater, Carousel Theatre and Syracuse Stage.

Eric van Baars* of Cuyahoga Falls, Ohio, as Max. Van Baars is well-known to Porthouse Theatre audiences having starred as Applegate in “Damn Yankees,” as “The Music Man,” Felix in “The Odd Couple,” Herod in “Jesus Christ Superstar,” Will Parker in “Oklahoma!” and so many more. He also has appeared at Radio City Music Hall, Great Lakes Theater Festival, Walnut Street Theatre, St. Louis Repertory Playhouse and Beck Center for the Arts.

Porthouse Theatre features free parking and allows patrons to bring in picnics (including alcohol) to its grounds to enjoy the beautiful surroundings of the Cuyahoga Valley National Park, which is located next to the theatre grounds. A covered picnic pavilion is available for reservation at $2 per person or free for subscribers and is based on availability. There also is a concession stand of light snacks and beverages.  Many picnic tables are available for everyone’s enjoyment at no cost.

Porthouse Theatre is located on the grounds of Blossom Music Center at 1145 W. Steels Corners Road in Cuyahoga Falls, Ohio. Single tickets range from $25 to $33 for adults and seniors and $17 to $20 for students. The box office is located in Kent State’s Music and Speech Center on the corner of Main Street and Horning Drive in Kent, Ohio. The box office accepts personal checks, Visa, MasterCard and Discover.

Dr. Halis Sakiz, Aggarwal-Blackburn Visiting Scholar in EHHS, and associate professor at Mardin Artuklu University in Turkey, will share his published research on the delivery and effectiveness of counseling services to an increasingly multicultural population in several countries.