The inaugural Jerry M. Lewis May 4 Lecture Series and Luncheon took place May 2 at the Kent Student Center Ballroom with Tammy Clewell, Ph.D., professor in Kent State University’s Department of English, as the featured speaker.

Clewell’s presentation entitled, “Remembering the Contested May 4 Memorializing Process,” discussed the contentious and lengthy process of creating a May 4 memorial on the Kent Campus. 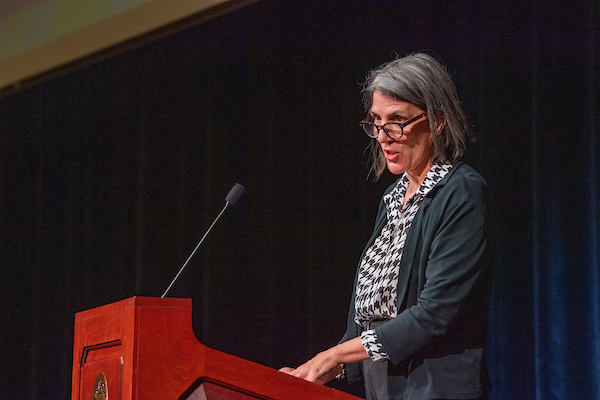 The lecture series was created to honor the legacy of Lewis, Ph.D., Kent State professor emeritus of sociology, and to advance the scholarship of May 4, 1970 – the day the Ohio National Guard opened fire on a student antiwar demonstration, killing four and wounding nine others – and the Vietnam War era.

Lewis served as a faculty marshal in 1970 and witnessed the May 4 shootings. He has since devoted time to researching, memorializing and lecturing on the events of May 4 and remains an active leader and voice for the legacy and study of May 4, 1970.

As part of the luncheon, faculty marshals who served during the May 4 shootings were honored,  including a special tribute to the late Glenn Frank, a geology professor who is credited with saving the lives of countless students that day when he begged students to disperse after the guard began shooting, out of grave concern the soldiers would fire again.  Frank was memorialized in the showing of the short film, “American Heartbreak, the Glenn Frank Story,” by Cleveland filmmakers Dale Omori and Harlan Spector.

Also in attendance at the event was Norm Duffy, retired professor of chemistry, who, too, was a faculty marshal on May 4, 1970.

In Lewis’ remarks, he paid tribute to Duffy, saying, “Norm Duffy thinks he’s a chemist, but he’s a hell of sociologist. He taught me a lot about the role of faculty marshal.”

President Todd Diacon, in his remarks, thanked all faculty and paid tribute to those who served on May 4, 1970. He also praised Lewis for years of dedication. “The definition of a great day at Kent State is when you see Jerry Lewis,” Diacon said.

The lecture series honoring Lewis was made possible through a donation from Kent State alumnus and former Kent State Board of Trustees member Michael Solomon, a 1974 graduate, who endowed the speaker series to honor Lewis’ decades of contributions to the Kent State community and to preserve his legacy.

Appearing in a video at the luncheon, Solomon told Lewis, “You are a hero in my eyes.”

In 1971 with the help of students, Lewis established the first candlelight walk and vigil, an annual event that begins 11 p.m. on May 3 and continues until 12:24 p.m. on May 4, the time of the shootings. Lewis was one of the four co-authors of the application to add the May 4 site to the National Register of Historic Places, which was approved in February 2010.

Clewell began her remarks by thanking Lewis, noting how she has several times been part of a group he guided through the May 4 site. “I learned on his walking tours what happened and saw the locations of the events.  I also learned that walking and listening and asking questions and pointing and pausing in a difficult landscape marked by the tragic loss of the lives of four young students and the wounding of nine others could serve as a political intervention and as an act of remembrance and reckoning.”

Clewell had written her dissertation on the early 20th-century cultural shift in the United States and Britain on the way we mourn personal loss and memorialize public tragedy. She said that when she arrived at Kent State 20 years ago, she was surprised and disappointed by how May 4 had been memorialized on campus.

"So we gather in remembrance and we say their names: Allison Krause, Jeffrey Miller, Sandra Scheuer and William Schroeder."

“The May 4 Memorial, dedicated in 1990 – 20 years after the events – struck me as suspiciously small in size, devoid of accessible meaning and lackluster in emotional impact.  But my disappointment did invoke in me a sense that there was a story – or better yet, stories – to inquire and learn about regarding the events of May 4 and the efforts to memorialize them.”

Clewell then embarked on the research to examine all phases of the memorializing process, including the controversy over whether to include the names of the slain and wounded students on the memorial. That work currently is on display at the May 4 Visitors Center as an exhibit Clewell curated, that includes all the documents showing the contested memorializing process.

Clewell said as the years have passed the university has become increasingly open to addressing and memorializing the May 4 tragedy, and noted the many physical sites of remembrance of May 4, 1970 on the Kent Campus, including the Prentice Hall parking lot markers on the spots where the four students were slain, the May 4 Visitors Center, the May 4 walking tour, National Historic Landmark designation and the newly installed bronze markers on the spots where the nine students were wounded, as well as annual commemoration events including the candlelight walk and vigil.

Clewell said some may wonder why she bothered to research the past controversies about building the memorial.

“Why dredge up stories of old grievances at a time when many in the May 4 community might well agree that Kent State has reckoned with the past and cultivated a climate of reconciliation and healing? Why not just leave well enough alone?” she said.

Clewell answered that question by saying, “History teaches us that justice and the kind of social change that can be promoted through memorialization doesn’t just happen. It is the result of ardent, committed and dedicated individuals who resolve to work collectively, to advocate, sometimes to agitate and even litigate, for a vision of a more perfect union based on inclusivity and not violent exclusions and brute force.”

“Like many of you, I have been encouraged to inquire, learn, reflect.  And, upon reflection, the lesson I keep coming back to is this: The kind of justice and social change that can be promoted through memorialization doesn’t just happen. It really does require our continued efforts – our attention, work, vigilance,” Clewell said. “So we gather in remembrance and we say their names (of the four students killed): Allison Krause, Jeffrey Miller, Sandra Scheuer and William Schroeder.  In remembering the tragic loss of these young lives, we commit ourselves to a more just, equitable, and peaceful world.” 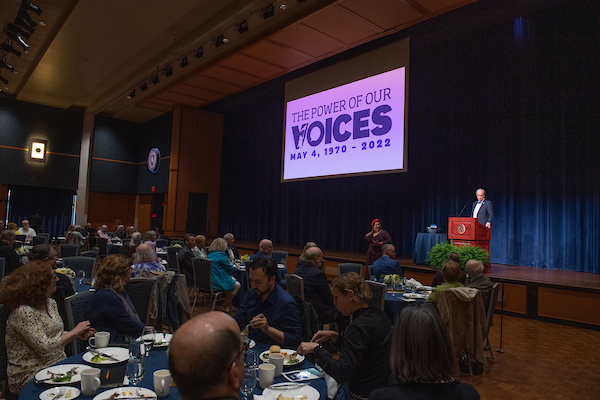 Lewis said he was pleased with Clewell’s presentation because it provided the right balance of scholarly research and May 4 history, and said the speech set the perfect tone to launch the lecture series.

The luncheon was hosted by Dean of University Libraries Ken Burhanna, who leads the group of faculty and administrators who solicit and review faculty proposals and will select each year’s lecturer. The chosen lecturer receives a $2,500 honorarium and each year will present their talk as part of May 4 commemoration events.