Kent State University has named Joseph Vitale Jr. as its new interim vice president for the Division of Human Resources. He assumed the role June 5, 2013. 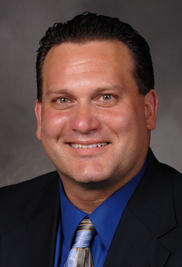 Kent State University has named Joseph Vitale Jr. as its new interim vice president for the Division of Human Resources. He assumed the role June 5, 2013.

Vitale has 20 years of human resources experience. Prior to this appointment, he served as director for talent management at Kent State. In that role, Vitale directed efforts related to the acquisition and development of talent, including staffing, on-boarding and development planning. He also oversaw the issuance of universitywide compensation and directed efforts for labor and employee relations. He has been with Kent State for the past eight years.

Before joining Kent State, Vitale worked within the staffing and recruiting industry through international and regional firms, where he developed and managed recruitment, staffing and organizational operations for clients throughout the United States. He served as a staffing forecasting and recruitment strategies consultant for firms in Northeast Ohio.

“Joe Vitale is an experienced human resource professional who has been involved with attracting and retaining some of our most talented and dedicated employees here at the university,” says Kent State President Lester A. Lefton. “I have confidence in his ability to steer the Division of Human Resources to offer the highest standard of service to all Kent State employees.”

“The division has realized many accomplishments and has been well-positioned for continued successful performance, meeting the needs of the university,” Vitale says. “I look forward to being a leader for the division as an interim, and I’m confident that the division will continue to excel at achieving institutional success while supporting the university’s mission.”

Vitale graduated from Ohio State University with a Bachelor of Arts in social and behavioral sciences. He began his career as deputy finance director for former U.S. Sen. John Glenn and served as an aide for former State Sen. Alan J. Zaleski.

He currently resides in Olmsted Falls, Ohio, with his wife, Jody, and two children, Hayley, 12, and Carly, 9. Vitale is involved in his community and serves as president of the Olmsted Falls Soccer Association, volunteer-coach for several youth soccer teams, and a former elected council-at-large for the city of Olmsted Falls.

Vitale replaces Alvin Evans, who stepped down from the interim vice president position for personal and professional reasons. Evans has returned to his former role of associate vice president for human resources.