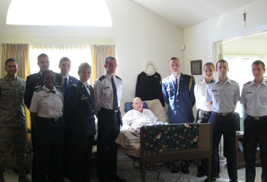 Hoover was a motor machinist first class in the U.S. Navy from June 1939 - June 1942. He was stationed on the USS Lassen that delivered ammunition and supplies to support the frontlines during World War II. Hoover was filled with excitement when Air Force ROTC ts at Kent State arrived at his house to spend the afternoon with him. Ripple presented him a certificate and Pin of Gratitude for his years of service in the Navy. Kent State Air Force ROTC ts performed a flag-folding ceremony for presentation to Hoover.

During the visit, Hoover told stories and advised young ts that hope to one day become a hero like him. Hoover was surrounded by friends, family and Air Force ROTC ts, who learned the importance of honoring the nation’s veterans.

Hoover spoke words and stories that touched the hearts of everyone that surrounded him that day.

“It was one of the most touching moments I have ever had,” says Theodore Rask, t wing commander of Detachment 630 Air Force ROTC. “I do not think there was a dry eye at Mr. Hoover’s house when he spoke about the selfless dedication and ultimate sacrifice that so many men and women have made for our country.

“Men and women from generations before us have made the ultimate sacrifice to protect the freedom, rights and life we have today,” Rask continues. “If it were not for their bravery, dedication and their undying service to our nation, we would not be the country we are today. Mr. Hoover is among the men and women that have protected and served our nation, and we had the opportunity to show our gratitude and appreciation to him. It will remain a day that Detachment 630 Air Force ROTC ts will never forget.”