Kent State University and the city of Kent, Ohio, were awarded the inaugural Catalytic Partnership Award for their collaboration to revitalize downtown Kent and improve the connectivity of the campus and the city.

A total of $130 million was invested in a redevelopment plan for downtown Kent to bring economic growth to the city. The partnership between the city and the university helped to successfully accomplish the following projects:

Gregg S. Floyd, Kent State’s senior vice president for finance and administration, said the revitalization of downtown would not have been possible without the dedicated efforts of strong partnerships with the city, PARTA, local developers and the university.

“These types of partnerships only occur when each side has the backing of its leaders,” Floyd said. “From the university’s perspective, the Board of Trustees, President [Beverly] Warren and President Emeritus [Lester] Lefton provided strong support, which contributed greatly to the favorable outcome.”

Floyd also noted the support of Kent City Council and the contributions of the late Dan Smith, who was the city’s economic development director.

“Dan worked diligently on this project and was one of its strongest advocates,” Floyd said. 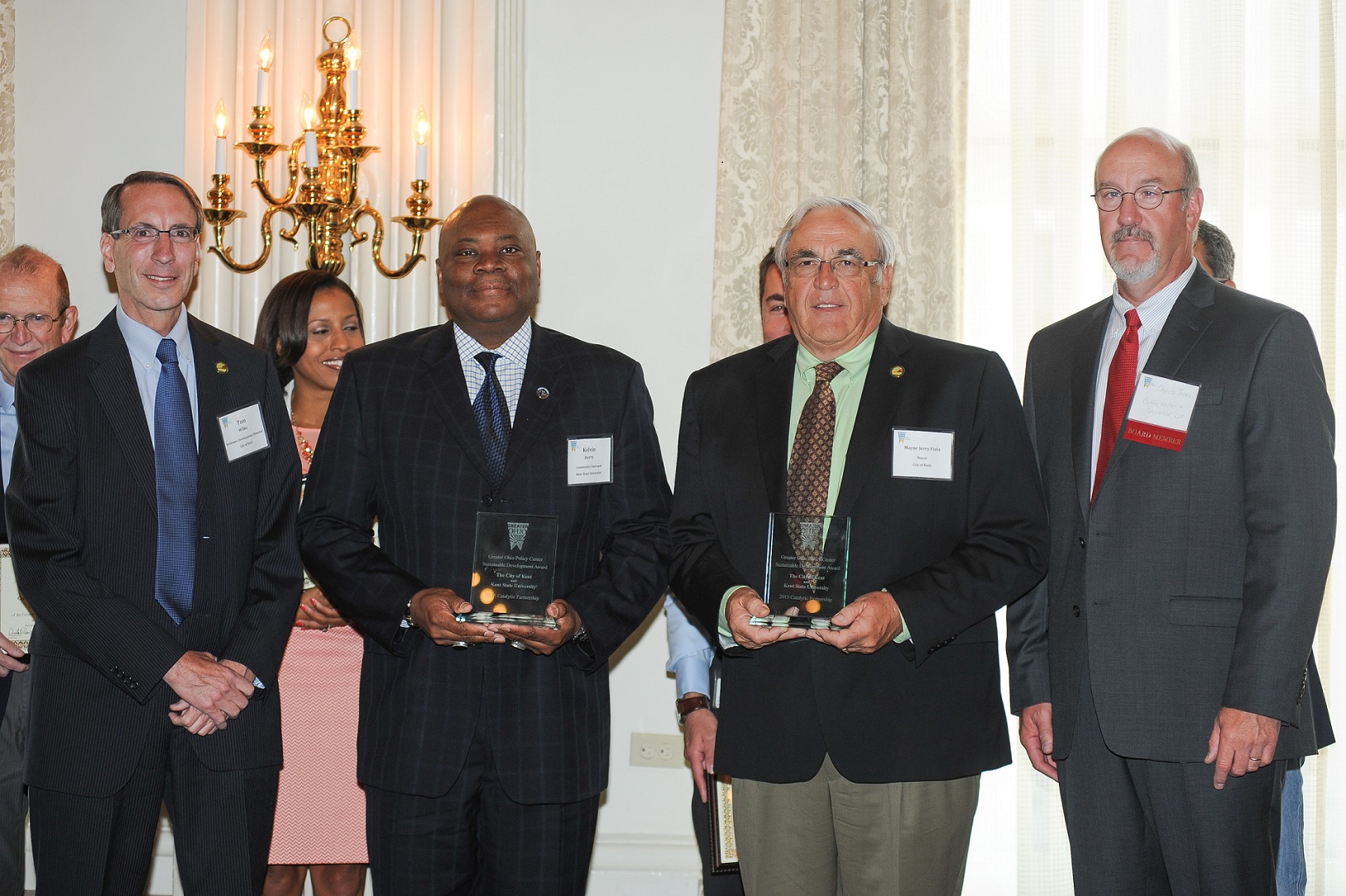 Dave Ruller, Kent’s city manager, said the city and university have a mutual commitment to the town-gown partnership, which has made collaboration a top priority.

“The city and university have taken the idea of partnership to heart, and the positive impacts for both have been unprecedented,” Ruller said. “Across the country, university cities are recognized as being some of the most vibrant, engaging and fun places to be, and we’re proud to have Kent being recognized as one of those great cities. We share services, responsibilities, ideas and resources – but most importantly we share a passion for our shared hometown.”

Ruller said that the transformation of downtown Kent would not have been possible if the city and the university did not believe that Kent’s downtown mattered to their shared future.

“Kent is a relatively small-sized city, but with one of the largest state universities in Ohio as our neighbor, we’ve been able to do some things that most cities only dream about,” Ruller said. “We don’t do all of this work to get awards, but when awards come along, it’s a great validation that we’re on the right track and our peers consider our work ‘best in class,’ which is a real honor. The greatest satisfaction comes from seeing residents, visitors, students and faculty enjoying the downtown sights and sounds and amenities.”

The redevelopment project worked to align the city, university and business assets in such a way that downtown would become a catalyst for economic revival. The project supplied 969 construction jobs, created more than 700 permanent jobs in Kent’s Central Business District, opened or expanded nearly 50 businesses, and increased commercial investment to an average of $55 million per year. The city of Kent and Kent State continue to work together to revitalize Kent with ongoing projects like the construction of new academic buildings on the Kent Campus, a new municipal public safety center, the connection of the Lefton Esplanade and Portage Hike and Bike Trail, and the upcoming road improvements to a section of Summit Street that runs through campus.

For more information about the city of Kent, visit www.kentohio.org.