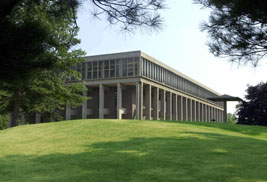 Kent State University has announced the finalists in the competition to select an architecture firm to design the new building for the College of Architecture and Environmental Design.

The four teams selected for the last stage of the design competition are:

In August, Kent State President Lester A. Lefton announced that the College of Architecture and Environmental Design will get a new home on the Kent State University Esplanade, a pedestrian walkway through campus that is currently being extended into downtown Kent, Ohio.

“This design competition has been an exciting process, and the anticipation only grows as we prepare for the final steps,” says Douglas Steidl, dean of the College of Architecture and Environmental Design at Kent State. “We perceive this as a building that will focus on the future, be a building that sets a new standard for collaboration between constituencies and reflects a high level of respect for the built environment while respecting the natural systems of our planet. This building will serve future students, faculty and the community with vitality for decades.”

The estimated cost of the new facility is $40 million. Currently, Kent State’s architecture program is housed in three separate structures. The new building will unite the college under one roof.

The new architecture building is part of the university’s campus transformation, called “Foundations of Excellence: Building the Future,” which involves the construction of new buildings, facility upgrades and establishment of dynamic, new spaces. The goal of this initiative is to create the most outstanding academic experience for students, faculty, staff, alumni and the greater community enriched by the university.

“This project, in conjunction with the recently completed improvements to campus and the planned renovations and additions to many other academic facilities, will continue the remarkable transformation of the campus reflecting the caliber of our institution and the commitment of our president, administration and Board of Trustees to excellence for our students and faculty,” says Michael Bruder, director of design and construction at Kent State’s Office of the University Architect.

Kent State received 37 entries in the design competition from an impressive group of internationally recognized architecture firms interested in working on the building.

The design goals established for the project include:
Facilitating peer-to-peer learning by consolidating the College of Architecture and Environmental Design in one location.
Recognizing through architecture that Kent State is an economic and design force in Northeast Ohio.

In January 2013, the four selected teams will present their design concepts, sustainability data and a cost estimate to the selection committee, followed by an abbreviated presentation that will be open to the public, including College of Architecture and Environmental Design students and faculty. While the sustainability data is analyzed and the cost estimate will be reviewed by independent sources, the presentation materials will be further evaluated by the jury to determine the winning design scheme. The winner of the competition is expected to be announced in February 2013.

“The location along the Kent State University Esplanade extension allows the new architecture building to be a physical reminder of the process used by designers to take an idea and translate it into a practical, tangible construction that benefits society,” Steidl says. “This will be the link between Kent State and the Kent community, both physically and metaphorically.”