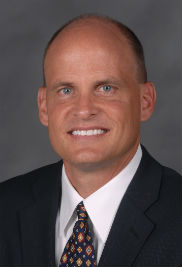 Kent State University Director of Athletics Joel Nielsen has been awarded a two-year contract extension, through June 2017, as approved by the Kent State Board of Trustees on Wednesday, Sept. 18.

Nielsen completed the third year of his original five-year contract this past spring after being hired in March of 2010.

“I would like to thank President Lefton and the Board of Trustees for their continued confidence and support of our efforts in Kent State Athletics,” Nielsen says. “Sharon, my daughters and I are extremely grateful for the extension and are happy to remain part of the Kent community. I am very proud of what the coaches and student-athletes have accomplished over the last three and a half years, and I look forward to continuing the Kent State tradition of academic and athletic excellence throughout our program.”

Under Nielsen’s leadership, the Golden Flashes have reached remarkable heights. Academically, the department’s 3.11 grade point average in spring 2013 marked the best semester in recorded history with 61 percent of student-athletes reaching a GPA of 3.0 or higher, including 24 individuals who posted a perfect 4.0.

Overall, Kent State remains the premier program in the Mid-American Conference. In the last three years, the Golden Flashes have been a frontrunner in the Excellence in Management Cup, the top MAC school in the Learfield Sports Directors’ Cup, won the Reese Trophy every year for men’s all-sports excellence and won the Cartwright Award for program excellence for the 2012-13 school year.