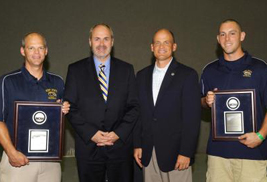 As if a run to the College World Series was not enough, the Kent State baseball team has had just as much success in the classroom.  The Golden Flashes were honored on June 14 by the NCAA for earning a Public Recognition Award, based on their most recent multiyear Academic Progress Rate (APR). The award is given each year to teams with APRs in the top 10 percent in each sport.

With perfect 1000 multiyear APR, the 2012 honor marks the third consecutive year that Kent State baseball has been recognized, putting the team in elite company as one of only 16 schools in the country to reach the accomplishment.  Of the 16 teams to earn the public recognition the past three years, the Golden Flashes’ program is the only public institution on the list that includes  Brown, Bucknell, Holy Cross, Columbia, Dartmouth, Duke, Georgetown, Harvard, Lafayette, Mount St. Mary's, St. Joseph's, Stanford, Penn, Vanderbilt and Yale.

The Golden Flashes’ academic prowess is backed by a cumulative 3.093 team Grade Point Average (GPA).  The team GPA brought extra special meaning to the team when they were recognized for having the highest team GPA amongst the eight teams in the 2012 College World Series.

The list of full APRs for all teams was released by the NCAA on June 20.

Each year, the NCAA tracks the classroom performance of student-athletes on every Division I team through the annual scorecard of academic achievement, known as APR. The score measures eligibility and retention each semester or quarter and provides a clear picture of the academic culture in each sport. The most recent APRs are multiyear rates based on scores from the 2007-08, 2008-09, 2009-10 and 2010-11 academic years.