Kent State University’s Facebook page recently reached 40,000 Likes, and in celebration of this achievement, University Communications and Marketing ran a Facebook contest for its fans. 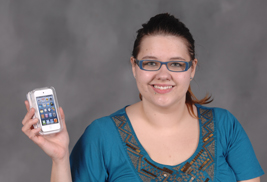 Kent State University’s Facebook page recently reached 40,000 Likes, and in celebration of this achievement, University Communications and Marketing ran a Facebook contest for its fans.

“We have traditionally held an annual giveaway when reaching 10K, 20K and 30K fans,” says Lin Danes, director of Web services and interactive media at University Communications and Marketing. “This contest, with its larger prize, is a way to express our appreciation to the individuals who follow us on Facebook.”

“Every once in a while, I will check the Kent State Facebook page to see what is going on,” says Knolhoff. “FlashLine always has nifty links to interesting information.”

Danes says the Facebook contest is only one way to interact with followers.

“We hope the contest encourages continued engagement with current friends and fans,” says Danes. “And perhaps by word of mouth or other promotions, we can pique the interest of others and nudge them to befriend Kent State in various social media spaces.”

“We work hard to respond to questions and deliver interesting content to our friends in these spaces,” says Danes. “In 2013/2014, we hope to expand our contests to our social media platforms beyond Facebook.”

As a result of research, Danes believes that Instagram and Twitter are the best ways to reach future and current students, while faculty, staff and alumni seem to be better reached through LinkedIn, Twitter and Facebook.

“During recent research with high school students, we learned that they are spending more and more time on Instagram,” says Danes. “This space dovetails nicely with the saying that a picture is worth 1,000 words. Because we have such a beautiful campus and interesting university community members, it’s the perfect opportunity to share images with those using that technology.”

In order to continue to encourage participation in Kent State’s social media platforms, the social media icons on the university’s home page and other kent.edu pages have been revamped.