Kent State University and the City of Kent have been selected as the winners of the Larry Abernathy Award from the International Town-Gown Association (ITGA). 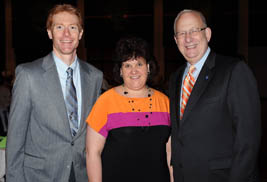 Kent State University and the City of Kent have been selected as the winners of the Larry Abernathy Award from the International Town-Gown Association (ITGA). The award honors the town-gown relationship that best represents the spirit of ITGA.

The award was announced at the spring Bowman Breakfast, the semiannual meeting and celebration of town-gown relations in Kent.

“This presentation best exemplified a town and university working together cohesively and promoting partnership and resources between all entities including the town, university, leaders, students, faculty and staff, neighborhood residents and businesses,” says Beth Bagwell, ITGA program director.

Larry Abernathy, the former mayor of Clemson, S.C., had a passion for town-gown collaborative efforts, and it was through his initiatives that the ITGA was created in 2003. The first Larry Abernathy award will be presented on June 5 at the annual ITGA conference in Buffalo, N.Y.

“The spirit of collaboration that we have fostered has allowed us to undertake some truly transformational projects,” says Kent State President Lester A. Lefton. “We are committed to building an exciting future for Kent State, the city and beyond. I’m enormously proud to be part of a community that is making such meaningful contributions to a regional renaissance.”

In addition, during the next four years, Kent State will be transforming its campus with new buildings and revitalized classroom, laboratory, studio, performance, living and studying spaces.

The ITGA award also recognizes the ongoing collaborative efforts between the city and the university. Kent State representatives keep in regular contact with city officials, creating a more open and productive environment.

Kent State’s Office of Community Relations works to promote respect, civility and collaboration between students and community members, and is actively involved with city officials, area businesses, the Kent Area Chamber of Commerce and neighborhood canvassing efforts. Several other ongoing collaborations between the university and city also were cited in the winning nomination.

“It’s great to have our work recognized as being the best that can be found — not just in Ohio or in the U.S. — but around the world,” Ruller says. “Constructing new buildings and reconnecting the campus to the downtown has been transformational, but the real excitement comes from discovering what we’re capable of accomplishing together.”

As part of the Larry Abernathy Award presentation in June, both the university and the city will receive $500 checks, both of which will be donated to Kent State scholarships.

“With 2013 being the 50th anniversary of the Bowman Breakfast, recognition by the ITGA is truly an honor for everyone involved,” says Lori Wemhoff, executive director of the Kent Area Chamber of Commerce. “Having the awarded monies go toward our scholarship efforts only reiterates the commitment of the entire team.”

The ITGA provides a network of resources to assist civic leaders, university officials, faculty, neighborhood residents and students to collaborate on common services, programs, academic research and citizen issues, creating an improved quality of life. For more information on the ITGA, visit www.itgau.org.

For more information on the City of Kent, visit www.kentohio.org.