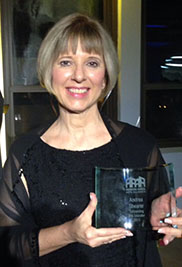 On Nov. 3, Andrea Shearer, dance division director and associate professor in Kent State University’s School of Theatre and Dance, accepted the Arts Educator Award at the 7th Arts Alive! Awards. The award ceremony is held biennially by the Akron Area Arts Alliance and celebrates outstanding individuals and groups throughout the artistic and cultural community.

“I was blown away. I was totally blown away,” says Shearer about finding out she won the award. “You never really expect these kinds of things because you know there are a lot of really deserving people, a lot of people working very hard in the area and a lot of people do really, really good work.”

Shearer was nominated for the award by a former dance coordinator and colleague, Kathryn Mihelick. Shearer says she nominated Mihelick for an Arts Alive! Award 10 years ago, but once the tables were flipped, she didn’t realize how big of a campaign Mihelick had organized.

“She got a lot of people to write letters for me, including the director of the School of Theatre and Dance, some of my other colleagues and even alumni,” says Shearer. “It resulted in me being chosen, and I think it’s the first time a dance educator has been selected for this particular award.”

Shearer says she has done a lot of thinking since finding out about the award and thanks Mihelick for bringing her accomplishments to not only the Arts Alliance’s attention but to the community’s attention, as well. “There’s teaching in the classroom, and that’s very exciting to me, but that’s only one aspect,” says Shearer.

Since becoming the dance division director, Shearer has implemented a dance education degree in the School of Theatre and Dance in an attempt to educate the community about modern dance. She also has worked with area dance educators in order to place Kent State students as student teachers and interns in local schools.

Shearer is currently on the Board of Education at the Falcon Academy of Creative Arts in Brimfield. It houses children from third through seventh grade, and she describes it as a community conversion school that uses the arts as a means to educate students.

“It’s the school I wish I had gone to when I was a kid,” says Shearer. “I’m in my fourth year serving on their board because dance and education are my two passions.”

Shearer says that receiving this award is a thrilling opportunity and gives her a feeling of responsibility. “I have to carry this torch, I suppose, and push myself forward to continue to do whatever I can, in whatever areas I can, to promote not only dance, but arts education in the area.”

For more information about Kent State’s School of Theatre and dance, visit www.theatre.kent.edu.

For more information about the Akron Area Arts Alliance and the Arts Alive! Awards, visit www.akronareaarts.org.