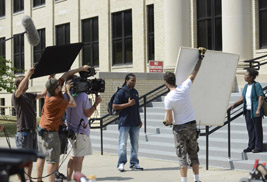 New commercials for Kent State University began airing on Sept. 12 as the university debuted a new television campaign. The new campaign builds on the university’s successful Experience for Life series that launched September 2010.

The new campaign includes four 30-second commercials and highlights Kent State students in a variety of situations – participating in the classroom, getting advice from faculty, being mentored by successful alumni and competing for academic recognition.

“The Experience for Life campaign speaks directly to the needs of our primary target audience of academically motivated students and their parents,” says Iris Harvey, Kent State vice president for university relations. “These families seek a full university experience, including a traditional campus, athletics, education abroad, internships, entrepreneurial opportunities and energizing off-campus recreation – all in a safe environment. While direct-from-high school students are the primary focus of the campaign, the university also gave a nod to lifelong learners and degree-completion adults.”

One of the commercials features Josh Cribbs, of the Cleveland Browns. After joining the NFL, the two-time Pro Bowler and career leader with eight kickoff return touchdowns continued his studies and received his degree from Kent State in the spring of 2010.

The commercials are airing on hit network and cable television shows, including The Big Bang Theory, American Idol, Glee, NCIS and Modern Family. The new commercials feature a musical score created for
Kent State once again by Mark Mothersbaugh, a Kent State alumnus who founded the new wave band Devo with fellow Kent State students in the 1970s and has become a successful composer. Mothersbaugh was featured in the last advertising campaign and also created the musical score for the previous commercials.

To help engage college-bound students, parents and alumni even further, Kent State continues the campaign online with digital content complementing the television ads and a campaign website – www.kent.edu/experienceforlife. The site includes all of the Experience for Life commercials and opportunities for Kent State alumni to share their stories about how Kent State gave them experience for life.