With all of the fashion students and professors at Kent State, one might expect successful fashion designers, but not many people would have guessed Office of Continuing and Distance Education Outreach Program Manager Angie Stevens as one of those peopl 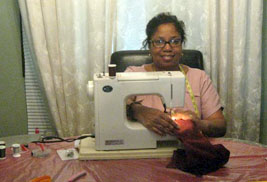 With all of the fashion students and professors at Kent State, one might expect successful fashion designers, but not many people would have guessed Office of Continuing and Distance Education Outreach Program Manager Angie Stevens as one of those people.

Stevens’ clothing line, Annie Ruth 8, was selected for showcase at the Fashion Week Cleveland Gala on May 12.

Stevens came into fashion by designing, sewing and making handbags for herself and her daughters, Deanna and Dominique. She also made special occasion dresses for them. The line Annie Ruth 8 was born when Stevens couldn’t find a mother of the bride dress that suited her style. She realized there was a lack of special occasion dresses that were feminine, sophisticated and classic for mature women with a youthful spirit.

“As a mom, you want something that is elegant and classic, yet youthful. So I decided to make my own and I saw there was a real market for that” Stevens says. “Since I was already used to making special occasion and evening wear, I thought it was a good fit.”

Annie Ruth 8 is named after Stevens’ mother, Annie Ruth, who had eight children.

“I thought it was only fitting because my line is for women and mother of the day,” Stevens says.

In February 2012, Stevens auditioned for Fashion Week Cleveland and was accepted to show her collection to the masses.

Stevens had auditioned for Fashion Week Cleveland 2011, but was told that she needed to find a niche and focus on a target market. That feedback helped her prepare for the 2012 audition and show.

As a person who has been working in higher education for more than 25 years with no formal training in fashion, Stevens says the whole process has been new to her, but very interesting.

“Going through the whole process is pretty intense, from showing your clothes and getting advice to meeting with our models and doing fittings, hair and make-up. I’m just going to try to enjoy it and try not to stress too much,” Stevens says.

Although Stevens has never sold any pieces of her line, she says she plans to start the process of building a business from it.

“The next step is to, hopefully get attention at the fashion show,” she says. “ If that doesn’t happen, I’m going to start slow and approach some local boutiques that specialize in special occasions and bridal wear and try to get some of my line there.”

She also plans on approaching the Kent State Fashion School Store with some of her jackets and handbags that fit a more youthful audience.

But, Stevens has even bigger dreams of making it in the fashion industry and hopes to audition next year for the new hit show Fashion Star, a clothing design competition.

“I would just say to anyone at any age that if you have something you want to do, just try it. You never know what could happen.”