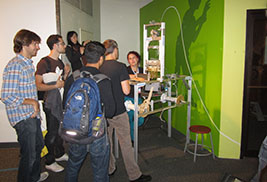 OSLOOM is an open-source, digitally controlled loom that allows users to control patterns and threads individually through a computer-generated image.

“OSLOOM differs from regular-floor looms because you can individually control each thread,” says Benitez. “You can input the design, create the image, and the computer will know which thread to lift on the loom.”

Benitez had been searching for a way to fund OSLOOM since she had originally started the project in 2007. During her search to fund OSLOOM, Benitez found Kickstarter, which had just been released to the public at the time. Kickstarter is an online fundraising platform for any independent creation that is in need of funding. Project creators list their project on the website, a fundraising goal and deadline. Anyone who is interested in the project is able to pledge to donate money to make the project come to life.

Thanks to the help of Kickstarter and supporters online, Benitez was able to raise more than her goal of $10,000 to fund OSLOOM.

“I’ve always been interested in interactive textiles and applications that aren’t always considered mainstream,” she says. “Integrating technology with fashion and weaving is my niche. I felt there was an opportunity here to actually expand on it.”

Benitez also is the principal investigator and co-curator of the new Kent State University Museum exhibit, titled Shifting Paradigms: Fashion + Technology. Shifting Paradigms addresses the use of technology that will affect future fashions, accessories and clothing. The exhibit is divided into four categories: Generative Technology Design, Democracy of Preference, DIY and Technology + Expression.

“The exhibit is basically an overview of artists and designers collaborating with other professions, like mechanical engineering or technologists,” says Benitez. “It shows how designers can integrate technology into their garments and accessory designs.”

Shifting Paradigms is located in the Broadbent Gallery in Rockwell Hall. The exhibit opened in September and will close in August 2014. The exhibit is free to any Kent State student, faculty or staff member with a Kent State I.D. or $5 for members of the public.