Kent State University’s Shannon Rodgers and Jerry Silverman School of Fashion Design and Merchandising (the Fashion School) took home a total of seven design awards at the 2013 conference of the International Textile and Apparel Association (ITAA).

ITAA is the global organization of textile and apparel scholars, and the Kent State contingent is both extensive and active. Sherry Schofield, associate director of Kent State’s Fashion School, currently serves as ITAA president, while fellow faculty member Harriet McLeod is the ITAA secretary.

“Straight and hard lines of the inverted pleats reflect the vigor of the wearer, yet her feminine and soft side is enhanced by the sheer jacket with subtle cloud motifs,” wrote Hahn and Kim in their abstract.

Their other garment, “Amber Refraction,” drew inspiration from the traditional Korean style of Hanbok, while also incorporating an image manipulated in Adobe Photoshop.

“The overall design in this ensemble is a visual bridge that intertwines traditional craft culture and contemporary design technology,” Hahn and Kim wrote. Hahn resides in Kent, Ohio, and Kim, a native of Seoul, South Korea, now lives in Tallmadge, Ohio.

Kent State senior Madison Palen-Michel’s dress design netted a $5,000 cash prize and a prestigious internship with Zandra Rhodes in London. Palen-Michel’s design was a byproduct of her previous study at the Paris American Academy.

“While in Paris, we were taught how to create this type of dress as we studied Madame Grès techniques,” the Kent resident explained. “The dress is all hand-sewn and fitted specifically for my body. At ITAA, it was entered in the category that emphasizes technique over design.” 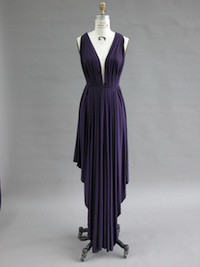 “While mountains of trash are piling up, the fashion industry is focused on producing more at lower costs to make higher profits,” wrote Öhrn-McDaniel, a resident of Tallmadge, Ohio. “This dress is done as a commentary on an industry where the craft is close to lost and the business is in focus.” 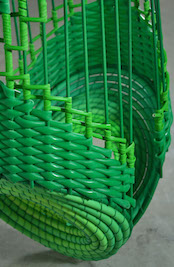 Jasmine Kornel of Kent, Ohio, won the undergraduate ESRAB award for her “Peace” ensemble –
a title that reflects both the aesthetics qualities of the design and its “utilization of sustainable techniques such as natural dyes, natural and organic fibers, and zero-waste patternmaking.”

Photo of award-winning dress by Madison Palen-Michel
At the 2013 conference of the International Textile and Apparel Association, Kent State University senior Madison Palen-Michel’s dress design netted a $5,000 cash prize and a prestigious internship with Zandra Rhodes in London.