Kent State University field hockey coach Kyle DeSandes-Moyer has one mantra that not only fueled, but bonded, both her first successful season guiding the Golden Flashes and the team she inherited. 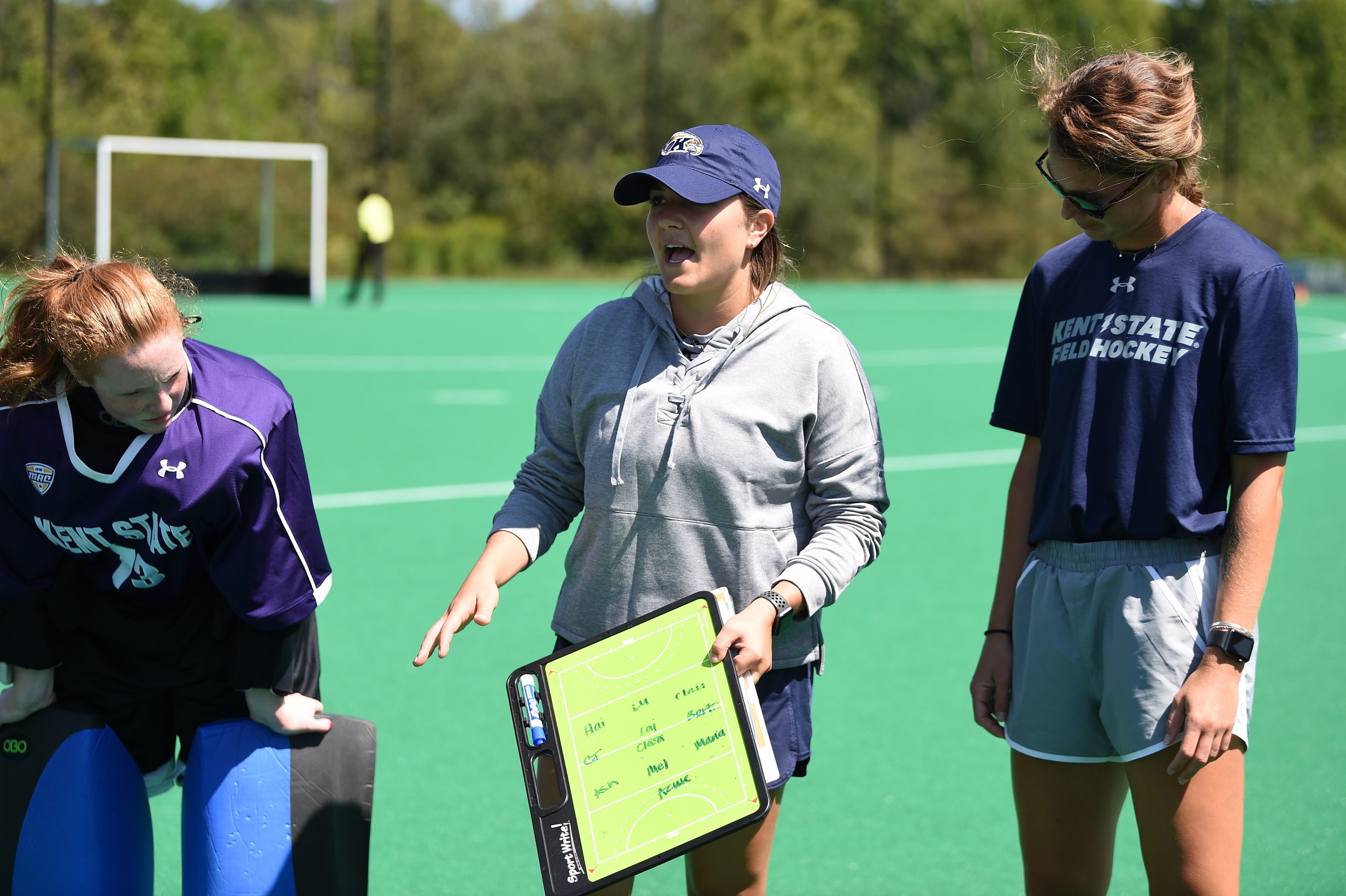 “We have to honor the women who came before us,” she said. “The girls joke around because I say that line a lot.”

But it has merit, considering the Golden Flashes have won or shared 14 of their 17 regular-season Mid-American Conference (MAC) Championships since 1998 and advanced to 10 NCAA Tournaments in that same period of time.

DeSandes-Moyer’s team won the 2019 regular-season title in her rookie year as the team finished 11-9 overall and 5-1 in conference and lost to Miami University in the MAC Tournament championship. For the coach, who picked up MAC Coach of the Year honors after her rookie season, it was still a bittersweet season, based on the “honor” she hopes to bring to the program going forward.

“We’re still upset we didn’t win the MAC Tournament this year,’’ the coach said recently as she reflected on her hiring and season of success. “That is really important for us. Continuing to be a dominant force in the MAC is something that we’re very much committed to as a coaching staff and as a team. That’s like a given here being No. 1 in our conference.

“For us, it’s also performing better on a national scale,” she continued. “Knocking off more of those ranked teams, competing better with those Big Ten schools showing up on our schedule and going to the NCAA Tournament are all real important for our program here. Maintaining a level of excellence here.”

In short, DeSandes-Moyer has described her goals going forward with the team she is actually just now starting to build. It is quite different from her most recent coaching experience.

“I grew up in Allentown, Pennsylvania,” she said. “I played a bunch of sports, including field hockey. I think my dad wanted a son. But I was more serious about field hockey and softball.

“Field hockey is very popular in Pennsylvania. As you can see, we have six of our players from Pennsylvania. I went to undergrad at the University of Pennsylvania in Philadelphia and played for a great coach there, Colleen Fink, who I am very close with.

“I had an opportunity to coach full time at Virginia Wesleyan and took it,” DeSandes-Moyer continued.
“While I was there, I met this woman who was going to start the (field hockey) program at LIU Brooklyn (Long Island University Brooklyn). Weirdly enough, her son and I actually went to college together, so we had a weird connection.

“I reached out to her and said I’d be interested in learning more about the program. I mean, field hockey in Brooklyn. This could be really cool. So we connected. Take this huge risk with 19 freshmen, a brand-new team. After the first year, she left. So I was the head coach there for two years.

“And that was a huge learning experience. But, obviously as a coach you want to keep moving up. You want to be in better and better conferences. You want to be playing higher-level competition, so Kent State is a step forward. Our nonconference is pretty much all Big Ten schools. This past year, we played Michigan, Iowa, Louisville, Ohio State, Indiana and Michigan State. So in nonconference, we are playing best of the best.

“Then you have the opportunity to win your conference, which has been done before here. Kind of amazing resources here at Kent. As a coach, you see that and go, ‘Wow, I see why this is an attractive place to coach. You can really do something here, and there is a track record of doing really well.’”

The first challenge for Kent State’s new coach, coming from Long Island University Brooklyn, was not to immediately try to make her own imprint on the successful program she now inherited.

“For me, it was important to understand their program, understand the culture they had here and see what types of things maybe needed a push or adjustment,’’ she said. “And there are certain things that as a coach, how I do things, are probably different from what they were used to.

“Where I came from was an inaugural program, so I was there year one with 19 freshmen. So that was different. I think this program, having so much history, knowing the players, the history of how it started here, how it got to where they are, who were the important people in that process – coaches, players – I just think it’s really important to understand the history and how you get to where you win 16 MAC Championships. How did that happen? That was very important to me.’’

Clearly, DeSandes-Moyer arrived with the sincere intent to “honor” both the present and the past surrounding Kent State field hockey.

“So it wasn’t like a huge program culture shift where we were overhauling the whole thing, just little adjustments that might have been different,” she said. “Very fortunate we did not have to turn the program around.’’

At the same time, her ability to build a program is what made DeSandes-Moyer attractive to the Golden Flashes.

“She brings a passion for the game to Kent State with proven success at developing a program,” Kent State Director of Athletics Joel Nielsen said.

At LIU Brooklyn, DeSandes-Moyer started the program in 2016 with 19 freshmen and had a winless season. In 2017, her team finished second in the Metro Atlantic Athletic Conference, and she won Coach of the Year honors.

Some might describe field hockey as a niche sport. Because its popularity is not universal, that can make recruiting an art as much as a science.

“I think the popularity is rising,’’ DeSandes-Moyer said. “I think it is more pervasive across the globe. In the United States, it’s primarily played on the East Coast, but it has extended its reach. I’d say there are pockets in Missouri and Michigan where they are developing the game there.

“They play a little bit in Ohio, North Carolina and California. So, when you are looking at where is the footprint of Division I field hockey, it’s primarily the East Coast, some Big Ten schools and out in California.”

And to compete with and defeat those schools, for a program like Kent State, recruiting is key. That has been an emphasis since the end of the season.

“I haven’t actually recruited any of the players on our current roster,’’ the coach said.

That will change. The recruiting piece is in gear now. And like several sports at Kent State, there is a focus internationally, along with hitting the field hockey hotbeds around the United States. The 25-player roster the coach inherited included eight international players, including five from Spain. With the technology of the day, online recruiting is as coming as online classes.

“Our coaching staff, we do a lot of video calls,’’ the coach said. “And we did do a trip to England and the Netherlands and watched players, met with them and met with their families.’’

One thing the players will surely have in common, both the current crew and into the future under the Kent State coach, will be to “honor the women who came before them,” striving to add even more championships along with coach Kyle DeSandes-Moyer.