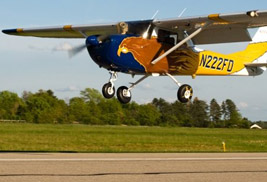 The Kent State University Flight Team recently competed and qualified in the National Intercollegiate Flying Association (NIFA) Region III Safety and Flight Evaluation Conference (SAFECON). As a result, the team was invited to attend the National NIFA SAFECON competition in May 2014.

National NIFA SAFECON is a national flight competition held annually for more than 300 aeronautics students in 30 colleges nationwide. The competition focuses on the practice of safe flying methods and helps students further advance their aviation experience, while putting their education to use.

“We attend Region III SAFECON every year in October,” Mangrum says. “This upcoming round is much more intense. Nationals are a lot like regionals, but the team will be judged on a larger scale.”

Along with the team qualifying for a national invitation, Jacob Hepfinger, flight tech senior, earned first place in the NIFA SAFECON short-field landing event. Hepfinger has been on the team for two years and says it is a great experience.

“Our team has a lot of fun,” Hepfinger says. “We’ve been trained to do what we love, and when these competitions come around, it’s great to show everybody what we can do.”

Teams will be judged on skills such as good timing, safe landings and critical thinking. Hepfinger says teams will be tested on tasks like aircraft recognition and Simulated Comprehensive Aircraft Navigation (SCAN). Ex-military and airline pilots, as well as current pilots, will be scoring them on these skills.

“They’re all very successful people, and a lot of them participated in the competition when they were starting out,” Hepfinger says. “This competition is great for our résumés, just like it was great for theirs.”

To prepare for the competition, team members will meet at Kent State’s airport two to three times a week for ongoing practices. With Ohio’s winter weather approaching, a majority of the flying will take place in March after the snow clears up.

As the team’s faculty advisor, Mangrum is proud of the flight team and its achievements.

“As a faculty member who has worked with them, it’s always great to see them perform well,” Mangrum says. “These students are hardworking, dedicated and skilled in their craft.”

Currently, the flight team ranks eighth in the nation as a result of last year’s national SAFECON. In the past, it has ranked as high as seventh.

Kent State’s flight team has excelled in previous competitions. In 2010, the team attended the National Intercollegiate Flying Association’s SAFECON and received the Loening Trophy for Best Collegiate Program in the country.

Kent State competes in Region III SAFECON annually, among other aviation schools from universities such as Ohio University, the Ohio State University, Western Michigan University and University of Cincinnati.

This year’s competition was held at Western Michigan University from Oct. 14-19.

Region III consists of Ohio, Pennsylvania, the southern half of Michigan and West Virginia.

To qualify as a Kent State Flight Team member, students must be enrolled with 6 credit hours or more.