Kickoff times for eight of Kent State University’s football games this fall have been announced by the Mid-American Conference (MAC), including four of the Golden Flashes’ home games. 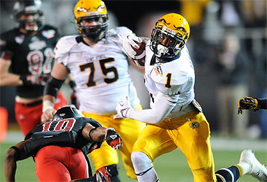 Kickoff times for eight of Kent State University’s football games this fall have been announced by the Mid-American Conference (MAC), including four of the Golden Flashes’ home games. Two additional broadcasts were also added to the Golden Flashes’ growing number of television and live video appearances.

Kent State’s final two games of the regular season against East Division rivals Miami (Nov. 13) and Ohio (Nov. 19) will both kick off at 8 p.m. The Wednesday home tilt with the RedHawks and the Tuesday night finale against the Bobcats will both be broadcast live on either ESPN2 or ESPNU.

In addition, the Aug. 29 season opener against Liberty will kick off at 6 p.m. on ESPN3. The Golden Flashes’ Sept. 7 home game with Bowling Green will begin at noon as part of the ESPN Regional/ESPN Plus/ESPN Game Plan/ESPN3Watch ESPN package with the MAC. More television announcements for the 2013 season are expected and will be announced as that information becomes available.

The following Saturday will be the Golden Flashes’ homecoming, hosting Northern Illinois at 3:30 p.m. in a rematch of the 2012 MAC Championship Game.

Homecoming for Ball State will be Oct. 12 at 3 p.m., in a rematch of last year’s 45-43 shootout victory for Kent State. The Golden Flashes look to retain the Wagon Wheel for a fourth consecutive season at Akron on Nov. 2 at 3:30 p.m.

Kickoff times for Kent State’s Oct. 26 game against Buffalo and its three nonconference road games are yet to be determined. All football games can be heard live on 640 WHLO and Golden Flashes Radio on iHeartRadio.

Travel packages to New Orleans and the Sept. 14 game at LSU are available at www.kentstatesportstravel.com.