Kent State University will hold its fall commencement ceremonies at 9:30 a.m. and 1:30 p.m. on Saturday, Dec. 15, at the Memorial Athletic and Convocation Center (MAC Center) 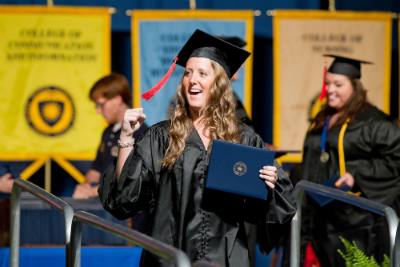 The 9:30 a.m. ceremony is for those receiving their bachelor’s degrees. The speaker for this ceremony is José C. Feliciano, a respected trial lawyer who also serves as Kent State’s 2012-2013 President’s Ambassador. A partner at Baker Hostetler’s Cleveland office, Feliciano has more than 35 years of experience in complex commercial and employment litigation. He is a past president of the Cleveland Bar Association, and he was also named one of the Ten Outstanding Young Men in America by the U.S. Jaycees in 1985, an award that had been given to President John F. Kennedy, Sen. Robert Kennedy and Secretary of State Henry Kissinger. Feliciano is the founder and chairman of the Hispanic Roundtable. He is former chairman of the Hispanic Leadership Development Program and founder of the Hispanic Community Forum, for which he also served as president. He also was a founder of the Ohio Hispanic Bar Association and served as its vice president. Feliciano, who was born in Puerto Rico, became the first Hispanic public official in the history of Cleveland when he was named chief prosecuting attorney for the city in 1980. In 1984, he was appointed by President Ronald Reagan as a White House Fellow.

The ceremony for those receiving master’s and doctoral degrees is at 1:30 p.m. The speaker for the afternoon ceremony is Virginia Horvath, Ph.D., president of the State University of New York at Fredonia (SUNY Fredonia). She also holds rank as professor of English and formerly served as vice president for academic affairs at SUNY Fredonia. Previously, she was a faculty member at Kent State University at East Liverpool and Kent State University at Stark and then dean of academic and student services for Kent State’s Regional Campuses and assistant to the president for strategic planning. A recipient of Kent State’s Distinguished Teaching Award, she has academic specialties in medieval literature, British literature, children’s/young adult literature and poetry. Horvath earned a bachelor’s degree in English from the University at Buffalo and a master’s and doctorate in English from Kent State.

The commencement ceremonies may be viewed live at www.kent.edu/commencement/webcast/live-webcast.cfm.