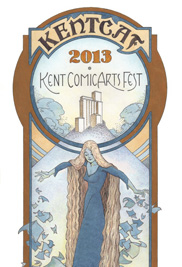 Kent State University will host the first-ever Kent Comic Arts Festival on Saturday, Oct. 19, from 10 a.m. to 5 p.m. The event will have exhibitors and on-stage programming in the Kent Student Center Kiva, featuring area artists, illustrators, writers and cartoonists, and a special VIP party in the evening.

Kent State graduate, Wayne Harold, ’88, organizer of the event, says while working on a video project with a friend, he thought of the idea to organize a comic festival.

“Kent Comic Arts Fest grew out of my work creating the P. Craig Russell's Guide to Graphic Storytelling DVD series,” says Harold. “Both Craig and I thought that it would be interesting to do a live version of the master class, and from there we decided to expand it to a full-day event with other guest creators and programming.”

Tom Batiuk, ’69, will be there, signing books that the Kent State University Press is releasing.

“They’re bringing out The Complete Funky Winkerbean, so I’m going to be there with volumes one and two,” says Batiuk. “I’ll be signing them, and I’ll be there to talk to people. When I’m not doing that, I’m just going to be enjoying the festival as much as I can.”

Batiuk, who unveiled a Funky Winkerbean mural in The Nest on the second floor of the Kent Student Center last year, says coming back to Kent State is always a nice and pleasant experience.

“Kent State was very good for me because it grounded me and got me started,” says Batiuk. “Educational facets continue to this day because when you do a comic strip, you’re constantly educating yourself, and the roots of that started back at Kent State.”

Exhibitors will be set up on the second floor of the Kent Student Center selling merchandise such as comic books, graphic novels, fine art prints, sketches and more. Many facets of the festival are free and open to the public.

“Anyone on campus can come meet the artists and talk to them, and buy things from the exhibitors,” Harold says. “There’s no charge for that. It’s when you go down to the Kiva, that’s when you’ll need a ticket to get in.”

Admission for the all-day programming is $15 for the public and $10 for current students with a valid Kent State ID.

“Usually with these comic conventions, you go to gigantic hotels and the main thing is all the tables, but the presentations are always in a little side room,” says Harold. “I like the idea of actually being up on a stage with nice lights and sound and making it more of an event.”

Batiuk is especially excited for this festival because he thinks it is fun being a part of festivals that are just starting up.

“For somebody who has grown up reading comic books, these are the little slices of heaven,” says Batiuk. “I enjoy it, and I’m looking forward to the Kent Comic Arts Fest.”

The VIP party will be held at the Zephyr in downtown Kent, which will include food, refreshments and an opportunity to socialize with the guest creators. Tickets for the party include all the standard ticket features, but are limited, cost $75, and are available pre-order only until Oct. 11.

For more information about the festival and how to purchase tickets, visit www.kentcomicartsfest.com.